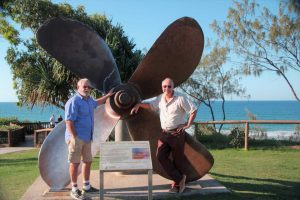 Original purchasers of the prop, Peter Cantrell and Adrian Patterson, are happy she is staying right where she is

One day back in 1997, a slow procession with a very special cargo on board was making its way to its final resting place. The propeller of the Cherry Venture was coming home to Rainbow Beach after a very long time away.

For the uninitiated, the Cherry Venture ran aground on Teewah Beach in July 1973. After numerous attempts at re-floating her she was left where she lay to become a famous tourist attraction for the Cooloola Coast.

In December 1985 Bill, Tony and Bruce Dunne from Caloundra recovered the prop from the wreck with a thermal lance.

“In 1997, it was rumoured talks were underway by the Getaway Resort to purchase the propeller. We thought it should be here for the community to enjoy and went into negotiations with the Dunne family,” explains Adrian Patterson.

“It started out at $12000 but we (Adrian, Peter Cantrell and Tony Huxley) eventually got her for $6000 with the proviso that the Dunne’s be named on the plaque.

“We jumped in the truck and flew down to bring her back. Because she was so big we had to take the back roads with a few pit stops along the way” laughs Adrian.

“The Channel 9 reporter covered the story sitting atop the propeller and stated the prop will still be here long after the rest of the ship is gone! He was right! 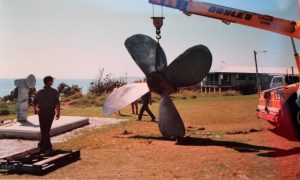 After Vince Clayton, Simon Bigelow and Adrian Patterson restored her to her former glory, a crane lifts the prop into place

“We wanted the prop placed where it is now, but objections were made and it was bandied around that it should go on the centre block. That wasn’t going to happen!” says Peter. “It would have been lost down there. It needed to be where everyone could see it and enjoy it.

“I recently read the proposal for the foreshore redevelopment and noticed that they are planning to move her to behind the new toilet block!” said Peter. “I wanted to know who wanted it moved and why. I got no answers so asked the Community News to try and find out.”

The Mayor, Mick Curran, has responded, “The propeller is not moving from its current location.”

“We would like to acknowledge Gympie Council for its support both now and in the beginning,” stated Peter.

“It needs to stay where it is. It would have to be the most photographed part of Rainbow Beach. Everyone wants their photo taken on the propeller!”

We made our way to the prop for a photo and there was an elderly couple posing in front of her!