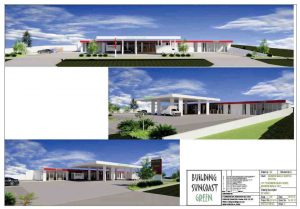 At the Gympie Regional Council’s ordinary meeting last month, the application for the proposed new service station at Rainbow Beach was unanimously approved, subject to conditions being met by the developer.

The site of the new service station is where the current Fraser Island barge and ticket office now stands on the main road into Rainbow Beach.

The service station is proposed in a format similar to other service stations, with an ancillary convenience component and also food and drink outlets.

The building is only a single storey and has a total of eight pumps. The hours of operation proposed are 5am to 10pm, 7 days a week, with four air pumps for re-inflating tyres.

As the proposal is on a state-controlled road, the state’s response lists three pages of requirements including installation of a footpath and a bus-stop.

The site is zoned residential choice on the planning scheme, which is primarily intended for unit developments, however this development is an impact assessable development application.

Because a service station is impact assessable in any zone, it suggests there is no one desirable location and the application is needed to be assessed on its own individual merits.

In this case, the subject site is considered well suited on the main road with impacts minimised and Main Roads who have assessed the impact, are happy with the application.

Thirteen submissions were received against the proposal, mostly stating the lack of need for an additional service station in Rainbow Beach.

The applicant submitted a needs assessment, which does establish some need for an additional service station in Rainbow Beach and will not undermine the viability of existing facilities in the town.

There were no objections to the motion and Council voted unanimously to approve the proposal, with the extra requirements being met.

Cr Waldock said: “It just goes to show the town is growing and it’s fantastic, and as you were saying, the service stations down there have a problem with cars backing out onto the road, well there is another service station going in so there will be less of that problem and I’m all for it.”

Councillor Jensen said she had not been in favour initially, however after talking to locals and the issues with fuel and the lack of air hoses she agreed the service station was necessary.

Cr Jensen said it would bring jobs and with only thirteen objections it should go ahead. She said she had spoken to residents who are happy as it will have extended hours and air hoses which are urgently needed.

Councillor Dan Steward said: “I think it will make an ugly site look a lot better.”