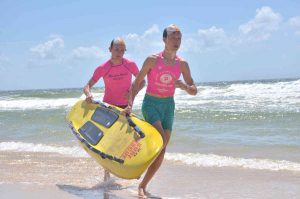 Liam and Oliver Pratt vye for the title of Champion Patrolling Team. Photos by Julie Pratt

The day saw our club’s eight patrol teams compete against each other for the prestigious honour of being crowned Champions.

In a shock result, Team 5 secured victory after successfully lobbying to have Team 4 disqualified from the Board Rescue event. Led courageously by Tas McClintock and Greg Nott, Team 5 walked the walk after well and truly talking the talk in a pre-competition press conference.

In a highly controversial move, Team 1 lodged several unsuccessful challenges to the validity of the point scoring system given it generally rewarded skill, fitness, participation and performance.

Notwithstanding the above challenges (which may be real or perceived), the carnival committee warmly thanks the organisers, helpers, and competitors for a fantastic day of light hearted and spirited competition on the beach and look forward to doing it again next year!

Little Lifesavers is a program where highly skilled lifesavers