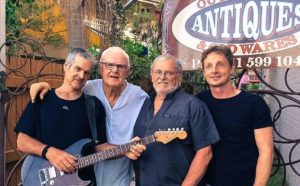 Shades of Grey is a Sunshine Coast rock band that is the combination of two long-term associations.

Mike and Eddy started playing together in 1965 in Sydney and were runners up in 1967 as part of the Hoadley’s national ‘Battle of the Sounds’.

After avoiding each other for almost 20 years, a chance meeting at Circular Quay led to them playing together again.

Simon and Craig have played together on a regular basis over the past 20 years.

Simon is still currently playing with The Remedy, and Craig played as part of coast duo, Sauce.

Enjoy this band on Saturday March 31 at the Tin Can Bay Country Club.