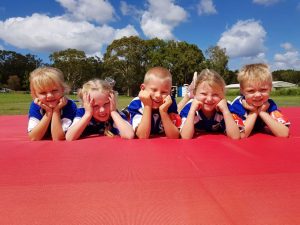 Gemma, Tayah, Zeff, Maddison and Zayden from the U6 and U7 groups look forward to the Cooloola Coast Little Athletics Christmas breakup on December 15

WOW is all I can say every time the centre event competitions are held. Training sessions are really paying off as athletes in all age groups are improving in both skill and competition rules. Simple things like walking out the back of the throwing circle after shot put and discus are becoming second nature, which will ensure that every go counts and will not be lost to a technical foul.

All track and field events will be recorded by the end of the first half of this season and will be measured against achievement targets for Green Awards.

Athletes are always reminded that despite competing in age groups the only times and measurements they need to beat is their own. In the recent 200m sprints there were several personal bests smashed and after several pleas to do so, even young Tiny Tot Bonnie Bate even ran the whole ‘big race.’

The Christmas Break up will be on December 15 where mid-season Achievement Awards will be presented. I would like to thank all the parent helpers that assist with the Centre either setting/packing up, taking on coaching roles, scribing records of events, photographing, administration and being a positive influence for the youth athletes.

A big thank you goes to Coach Bill for donating his time to inspire the next generation of track and field stars. Seasons Greetings from the Cooloola Coast Little Athletics Centre.