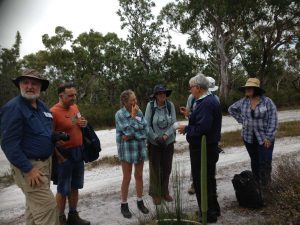 Dr. Don Sands from CSIRO, Shelley Gage and other BioBlitzers after capturing his specimen of the Boronia moth

Scientists participating in the Cooloola BioBlitz over the weekend were excited to discover a small moth new to science crucial for pollinating Boronias.

Over 80 scientists and citizen scientists (keen amateurs) aged from 8 to 80 blitzed the bush in the National Park surrounding Rainbow Beach seeking to identify as many living plants and animals as possible during this pioneering event organized by the Fraser Island Defenders Organisation (FIDO) and Cooloola Coastcare.

The moth that excited such interest is only a few millimetres long, but CSIRO entomologist Dr Don Sands said that it may hold the key to saving threatened Boronias including the endangered Wide Bay Boronia.

Spider expert Robert Whyte said that of the 350 specimens of spiders collected covering 35 spider families he expected about a hundred to be new species not previously described.  Many of the spiders are so small that they need to be identified under a microscope, but they still play a vital role in the ecosystem.   He said that having collected all over Australia, Cooloola was amongst the top spots for biodiversity he had encountered.

The bird observers listed 99 different species seen over the weekend but because Cooloola is regarded as one of Australia’s top sites for bird-watching, all had been previously recorded for the area.

Botanists were more than busy as they scoured the bush and mangroves adding many new species to the wide array of plants that were previously recorded for Cooloola. Their quests were enhanced by the discoveries made by the invertebrate teams.  Within the botanical teams was a grass expert, Dr Melodina Fabillo from the Queensland Herbarium who is still to confirm the identification of all 40 specimens collected but this will add greatly to the list of grass species previously recorded from Cooloola.

FIDO’s CEO Dr. John Sinclair who organized the BioBlitz with Cooloola Coastcare’s Dr. Lindy Orwin said that the full outcome of the BioBlitz would not be known for some weeks until the identification of species have been reliably confirmed.

“Many plant specimens are being prepared to be submitted to the Queensland Herbarium for identification while many spiders and insects will be sent to the Queensland Museum for confirmation and this takes time,” he said.

He added that the great wealth of experience from the experts had helped to raise the skills of the citizen scientists and this assisted the identification and gathering data on vertebrate and invertebrate fauna, birds, plants and fungi.

The BioBlitz was so successful that citizen scientists from specialist groups of botanists, frog, fungi and butterfly enthusiasts are planning complementary BioBlitzs to follow up their observations at the optimum season for their specialty.

Bioblitz participants also heard presentations from a range of experts, with one of the important themes being the complexity and uniqueness of the Cooloola ecosystem. These features were emphasised by Prof. Susanna Schmidt in her description of microbial-plant interactions beneath the dunes and how this changes between the youngest and most ancient dunes, and by Dr. Sands in decribing the critical role of moth larvae in breaking down leaf litter, the under-appreciated role of many insects as pollinators, and their susceptibility to inappropriate fire management regimes.

Dr Orwin said that planning for the next large-scale BioBlitz has already begun for next Autumn and that a Facebook group called ‘Cooloola BioBlitz’ has already been established to enable citizen scientist to remain in touch and especially with mini BioBlitz’s that Cooloola Coastcare can help facilitate.

Discovery of the Boronia moth:  From Shelley Gage (Goomboorian)

‘On the 25th August 2018, during the Cooloola BioBlitz my team was recording plants on the slope between the sand track and the fens.

During our lunch break I wandered near the road taking more photos and noticed many small insects flying around a Boronia rosmarinifolia, They were not settling so it was difficult to see what they looked like but I had the impression they had chrome covered wings. The team all came over and tried to capture them with cameras but the insects were too fast.

On arrival at the BioBlitz base, I spoke to Don Sands who became quite excited and we organised to go back on the Sunday morning to collect some of the insects.

On examination Don said he believed they were in the family, Heliodinidae (metal moths) which contains many insects about which little is known. He will have the moths identified or described if they have not already been identified. Many of these moths are believed to be pollinators of Boronia and each one may be specific for a particular Boronia.

We are now excited to start looking at not only the plants for identification and recording but also associated insects to have them identified and their function in the insect’s life cycle determined.’