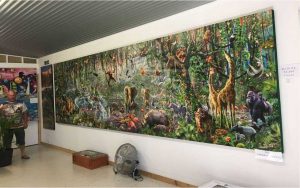 John from Imbil has built a special museum to house his completed puzzles, this one has over 40,000 pieces!

In practising for retirement, we recently spent a long weekend in Imbil, south-west of Gympie. BBRRRR… we chose the coldest weekend to do it. BBRRR…wasn’t it cold at 0.3 degrees each morning! Sorry, all you southerners, we Queenslanders found the mornings quite chilly but the days were glorious!

There are many small towns and communities out there, waiting you to discover. You never know what you may find in them.

We were amazed at the huge jigsaw collection that we found in Imbil. An avid jigsaw fan who has been doing puzzles for 20 years has built a very special museum to house all his completed puzzles. For all you puzzlers out there, take a look at the fourth largest puzzle in the world. John is working on the second largest puzzle. It has 40,000+ pieces. WOW!

Besides the astounding puzzles on Yabba, we thoroughly enjoyed our walks each day along the paths established on the banks of the river. It was truly a beautiful and restful caravan park right in the heart of Imbil.

And how was the TV reception? Amazing, but, we were only 40 kms from Gympie.

In a final farewell to winter, let’s look at some fun Winter Facts.

The coldest temperature ever recorded was -123° C at Vostok Station in Antarctica in 1983.

The volcanic eruption of Indonesia’s Mount Tambora in April 1815 created a “Year without Summer” in the Northern Hemisphere.

The autumn and spring equinoxes are the only two times during the year when the sun rises due east and sets due west.

For those that use a satellite dish for your TV reception, there are two new satellite receivers on the market. Altech UEC and Satking have both released their new receivers with some very interesting features.

The UEC box comes with a 12-volt power supply for the traveller as well as a ‘magic eye’. This allows the box to be installed in a cupboard and having the infrared ‘target’ coming out for the remote control to access to change channels and volume.

The Satking receiver has twin-tuners so that you can record one channel to an external hard drive and watch another channel. It also has the ability to watch Freeview when connected to a WiFi device.

See the full features of both boxes on our website www.saturnantennas.com.au/satellite