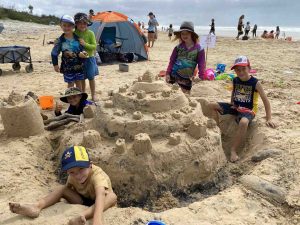 The 2021 Rainbow Beach Sandcastle Competition was held on a glorious sunny morning after a week of intermittent heavy rain.

Arron from Sandshapers of Noosa had an amazing sandcastle creation well underway, thanks to The Deck, the Community News and Cooloola Coast Realty.

By 9.30, 24 teams were working hard to create masterpieces, some from as far away as Victoria.

A steady stream of onlookers made their way down to the beach who were amazed by the mermaids, sea serpents, a pyramid, turtles, crocodiles, dragons, castles, an octopus and other incredible creations.

Arron had an extremely difficult time judging, his main criteria being attention to detail and smoothness of sand.

Best open: Under the Sea

Food and drink was supplied by the Rainbow Beach School P&C with Steve and Jed doing a great job on the BBQ!

Many are saying that it would be great if this could be an annual event, so keep an eye out for the next one.