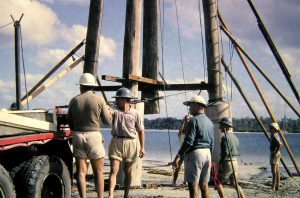 Ian Ross’s interest was piqued when he saw the old camping area photos of Phil Rogers Park in the April 2017 Community News. In 1966, he lived in Gympie, worked for ENERGEX supplying electricity to the sand mining plant in Rainbow Beach.  He now lives in Brisbane but still “gets up” to Rainbow occasionally – and I look forward to presenting more of Ian’s images to our readers in future editions.

In the years that followed the Second World War scientists became aware that the heavy black sand that existed below the surface on many beaches contained many minerals: rutile, ilmenite, zircon, monazite and others. They were rich in titanium and other minerals used in industry.

Sand mining began on the Gold Coast and northern NSW beaches in the 1950s and expanded to other areas soon after. Prospecting had begun on the Inskip Peninsula and areas south to Noosa as early as 1959. 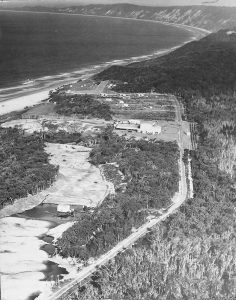 Queensland Titanium Mines obtained a lease to mine an area south of Inskip Point in 1963 and immediately started plans for a processing plant. Getting there was the big problem, the only access was via the beach from Noosa or a complex system of forestry tracks.

Widgee Shire Council, the local authority at the time, was very keen to help and had a road designed around the Tin Can Inlet from the Tin Can Bay road in no time.

Getting electricity there was the next problem. As the power line didn’t have to follow the road but could take a shortcut across the Tin Can Inlet to the substation at Tin Can Bay, it was hoped costs could be saved.

This seemed fine until Q.T.M. advised the Southern Electric Authority (predecessor of what is now Energex) of the power required to run a sand mining plant.

The small 11,000 volt substation at Tin Can Bay did not have enough capacity and it was advised that a new power line over part of the distance to Gympie would need to be built and re-energised at the higher voltage of 33,000 volts.

This was an unexpected blow which added substantially to the costs. 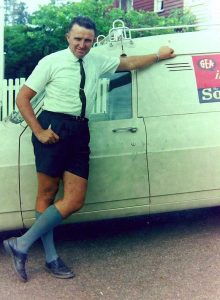 Queensland Titanium Mines were committed to proceed and work on the main processing plant, known as the dry plant, commenced in 1965. The plant occupied an area which has recently been cleared and fenced alongside Clarkson Drive north of Griffin Esplanade.

At this point I should explain how sand mining works. There are two plants: the first known as the wet plant consists of a dredge floating in a pond that has been dug ahead of it. It sucks up the sand and does a partial separation of the heavy and light sands.

In the case of the Q.T.M. Plant at Rainbow Beach, the minerals were trucked to a rail siding in Gympie and transported by rail to the Port of Brisbane

A jetty had been built and a pumping station installed to pump water along a pipeline following the dredge, so its dredging pond could remain full of water. 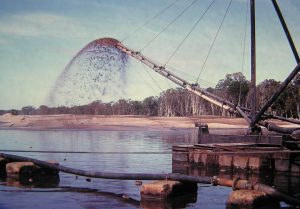 Campers who enjoy the lovely camping area at Pelican Bay today and wonder how this area was created can thank the sand miners of 50 years ago, for this is where the large wet plant entered leaving mounds of white sand behind it.

If you poke around on the foreshore you will find some stumps that remain from the jetty.

The smaller wet plant did not leave Pelican Bay – it mined along the foreshore up to the tip of Inskip Point and was dismantled when finished. Both wet plants were all electric; staff from Q.T.M. would build power lines to the dredge site and dismantle them when finished.

I have memories of the trailing leads that ran from the power pole through the pond and to the transformers mounted on the dredge. They looked no different to a household lead but were energised at 11,000 volts. 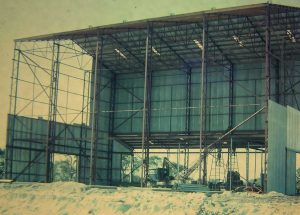 As an electrician, I shuddered as the Q.T.M. staff fearlessly dragged them around, but thankfully there were no accidents.

Housing the employees of Q.T.M was an issue that had to be resolved – the plants would operate 24 hours over three shifts and many employees were involved.

Building a township was an option but it was decided that the workers should live in Tin Can Bay and be bussed to and from the plant site. It was decided some essential maintenance staff should live on site and three houses were built: one occupied by an electrician, another by an engineering fitter and the third by a caretaker who did other general duties.

Q.T.M. had always been aware that the supply of minerals at Rainbow Beach would not last and indeed the quality of the mining had not been up to expectations. 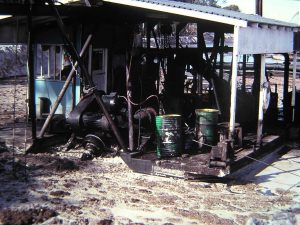 Q.T.M. requested the granting of a new inland lease to the south of Rainbow Beach in what is now national park. Drilling results were encouraging. This would be a new type of mining through land that was not flat, but inland mining had successfully commenced on Stradbroke Island by Titanium and Zircon Industries with good results.

The application for the new lease brought condemnation from environmentalists who strongly objected to this land, some of which was rainforest being mined. They won and the lease was denied.

Q.T.M. next looked to expanding on to Fraser Island and applied for a lease on the southern tip of the Island which was granted.

Mining across water on Fraser Island presented numerous challenges, jetties were built at Bullock Point on the mainland, and on the inland side of Fraser Island a road was constructed to link the lease to the jetty. 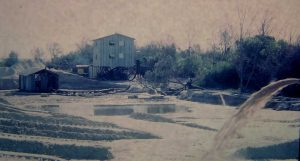 Riverside Coal Transport from Brisbane was appointed to ferry the minerals to the mainland. Loading and unloading facilities were constructed on both jetties. The wet plant returned to Pelican Bay where it was dismantled and transported, piece by piece, to Fraser Island.

The abandoned lease on the mainland was not forgotten. Q.T.M. had undertaken to rehabilitate the land that had been mined and did so diligently. In 2017, 46 years later, it is very hard to distinguish where mining took place.

The exception would be the airport; this was a mined area deliberately not rehabilitated so it could be used as an airport. The airport was poorly maintained until the arrival of Ray Parker in 1982, who took it over, cleaned it up and established his own Air Charter service. Now in his nineties he continues to supervise maintenance of the airfield.

Mining by Q.T.M. commenced on Fraser Island in 1971 – leases further north on the Island were already being mined by the American owned Dillingham-Murphyores Corporation. 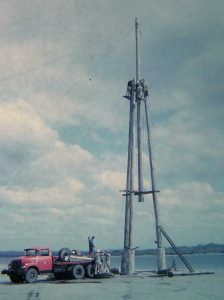 Objections to sand mining were initiated by the Fraser Island Defenders Organisation headed by John Sinclair from Maryborough. FIDO as it became known, used a very determined-looking dog as its logo.

Their early attempts fell on deaf ears by the state government who continued to grant leases. FIDO took their case to the High Court of Australia which ruled that the public interest was not being served by Sand Mining on Fraser Island, but mining continued.

The federal government eventually overruled the state government by cancelling the export licenses of the mining companies. Without their overseas markets they were forced to close.

The last shift at the Queensland Titanium Mines Plant at Rainbow Beach was on Wednesday September 8, 1976. The plant was then placed in mothballs in the faint hope that mining might resume. In 1985, a contract was awarded to Morton Engineering Company from Brisbane to dismantle the plant for scrap.

The three houses in the main street, which were now looking a bit out of place with businesses alongside, were also removed and trucked to new locations. 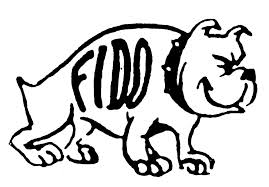 Rainbow Beach owes a lot of thanks to the sand miners who pioneered the town. They paid most of the costs of building a road and getting electricity to the town, and on their departure thoughtfully left an airfield behind.

Without sand mining Rainbow Beach may have never been created and the area swallowed into the Great Sandy National Park which now surrounds it.