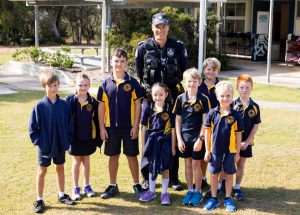 Queensland Road Safety Week was well supported by our local police, with Senior Constable Mike Brantz attending a parade at the school to talk with the students about getting to and from school safely each day.

Several students were congratulated by Mike after he observed them that morning, sensibly hopping off their bikes before crossing the road. He also emphasised that not only is wearing a helmet the safest option, it is the law.

Other great suggestions made by the children for keeping safe were staying on the footpath when riding, wearing a seatbelt when travelling by vehicle, and not distracting the driver when travelling.

A seatbelt meaning the difference between life and death was a particularly timely topic as prior to visiting the school that morning Senior Constable Brantz was in attendance at a serious crash a couple of kilometres out of town – a car carrying a mother and child had rolled both end to end and sideways.

Fortunately only one minor injury was sustained in the crash, and Mike directly attributed the survival of the occupants to the use of their seatbelts.

A crash without one at just 40km/h has the same impact as falling from a two-storey building. Use seatbelts every time – even on roads you know and at low speeds.

To promote the road safety message, School Principal Steve Bennett is running a weekly Road Safety Award at parade on Fridays to reward kids for practicing road safety on their way to school. The award is an ice cream generously supplied by Ruth at Sea Salt.

Let’s hope the road safety message starts to filter through to our visitors – Sergeant Mick Bazzo dropped into the August Commerce and Tourism meeting to speak about ongoing Operation Sandstorm, which involves beachside patrols and increased enforcement activity.

However you can also assist with stopping the dangerous few who ruin it for all of us. If you manage to catch dash cam footage that shows the licence plate and driver of any vehicle breaking the law, send it to Policelink and they will be able to prosecute from that information.

Anti-hooning laws have recently been strengthened in Queensland to hold the registered owner of a vehicle responsible for any hooning activity carried out in that vehicle. This makes it much easier for police to take enforcement action against mass gatherings of anti-social driving behaviour.

Sergeant Bazzo stressed “DO NOT put yourself in harm’s way. But if you can safely gain footage of drivers in the act of bad behaviour send it through to us – we follow up every single complaint.”

Let’s make camping enjoyable for everyone by doing our best to get rid of this inconsiderate and dangerous element.