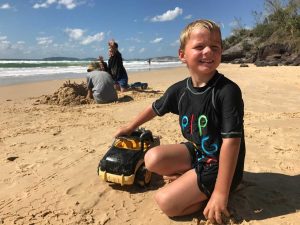 Tyron van Santen from Epic Ocean Adventures said, “The long weekend was solid and we were as busy as other years. The weather and beach conditions from (Cyclone) Debbie at the start of the school holiday period made it a quieter two week period.

“But that’s the way it goes here. February is usually our quieter month with poor weather, but not this year!”

“Maybe the Mikado did better back in its day but we have no records for that. I just checked my numbers again and it is the highest April occupancy ever and it isn’t over yet.”

Food retailers were also happy, said Sandy Brosnan from Ocean Breeze Seafoods, “A record Good Friday! I couldn’t jump over the amount of prawns heading out the door and down to the beach!”

Jay Kent said Café Jilarty had a fabulous Easter period, record turnover and great weather, but their barista, Brooke Bignell, summed it up:  “I didn’t move from behind the coffee machine from sun up till sundown for four days.”

The Rainbow Beach Aquatic Centre send “a big shout” out to the families that came and supported the local disco, with face painting, handball, swimming and “a little boogie”.

Melanie May at Tin Can Bay Tourist park said the town was also buzzing over the Easter Long Weekend, “Our guests commenting on the excellent weather for boating and fishing, with guests catching decent size flat head, loads of summer whiting and plenty of squid.”

“Earlier on in the Holidays was steady, with plenty of last minute bookings. Grandparents holidaying with their Grandchildren seemed to be a popular trend this year. Also, we had plenty of guests staying with us pre and post Fraser Island visiting from as far south as Tasmania.”

Cooloola Cove Youth Activity Program promoted and organised a host of events, and said attendance is growing every holiday.

After a big morning tea, they were then taught to bait the hooks and catch fish. There were a few whiting caught by the juniors and they had a lot of fun being involved despite the windy conditions.

Families enjoyed the complimentary BBQ and, after lunch, each junior was presented with a certificate, a new rod and reel and a tackle box.