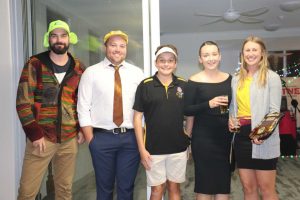 Debbie Cross was awarded the Cliff Kuhn trophy by his grandson,Sam