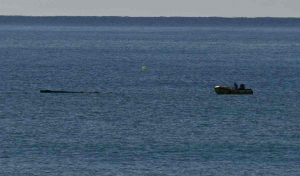 The whale being rescued from the nets. Photo by Dave Turnbull. Printed with permission.

The controversial topic of shark nets has again been a focus of concern here in our community after a whale was recently trapped off the Rainbow Beach coast.

Local residents played a vital role in alerting authorities to the whale’s distress, allowing the Queensland Boating and Fisheries Patrol’s Marine Animal Release Team to be called in to untangle and free the animal.

A Department of Agriculture and Fisheries spokesperson said specially-designed equipment was used to unpick the netting from the whale, and it was able to swim away.

Many locals are concerned more whales will be trapped in nets, as migration season for humpbacks is underway, during which time they travel from feeding grounds in the Southern Ocean to the warm waters of the Coral Sea to breed and give birth.

It is estimated that since 2001, 82 whales have been caught up in shark nets.

According to Queensland Fisheries data, two humpbacks were entangled in equipment last year, and four in 2020.

Anyone who sees a whale or other marine animal caught on drum-lines or shark netting is strongly encouraged to call the 24-hour Shark Hotline on 1800 806 891.

It is not the first time our wonderful community has played a pivotal role in rescuing a whale.

In 2019 Rainbow Beach residents came together to save a beached baby whale by towing it back out to sea. Rescuers dug around the stranded minke whale calf, slowly moving it closer to the water as others kept it alive by collecting buckets of water.

Is it time to get rid of the shark nets to keep our beautiful whales (and other marine animals) safe? Let us know your thoughts.