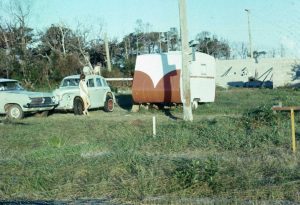 1972: Ian’s block at Rainbow prior to building – he had a two year building covenant on the original Land Sale

You may remember Ian Ross’s photos and stories of early Rainbow Beach, published this year in the Community News, when he first visited what would become Rainbow Beach in 1960 and fell in love with the place. In 1966, he was transferred to Gympie with the Southern Electric Authority of Queensland (now Energex) and was able to again renew an interest in the area.

Queensland Titanium Mines, who were sand mining the Inskip Peninsular, were our largest customer and received appropriate attention from the Electric Authority and visits to the area were not uncommon.

Widgee Shire Council, the local authority back then, was keen to develop a township in the area and badgered the Queensland Government through 1968 to subdivide the land between the mineral sand plant and the Rainbow Beach Road.

Their persistence was eventually successful: a township was surveyed and Council was commissioned to build the roads in the proposed estate.

It was finished quickly and the formation of the proposed town announced in the Government Gazette on February 15, 1969. The land sale would be by auction and held in the Gympie Land Office on March 26.

I did not think I had any chance of getting a block, but called at the Land Office and collected a brochure a few days ahead of the auction. There were 25 blocks in the subdivision divided into four sections.

Section 1 which was nearest the sand mining plant and comprised 5 blocks, was not offered for sale and I was advised was being held for possible future sale to residents involved in the Sand Mining operation.

The seven blocks along Rainbow Beach Road, three of which were occupied by houses for maintenance staff of the Sand Mining company, were also withheld presumably for sale as commercial blocks as the town developed.

I arrived at the Lands Office in Channon Street on March 26 about half an hour before the proposed sale. It was a very small building staffed only by the local Lands Department Officer, who I think was known as the land agent and an assistant.

There were no private auctioneers present, the Government Land Agent would conduct the auction. The Widgee Shire Council was well represented by Shire Chairman Neal Buchanan, Shire Clerk K. C. Rafter, Engineer Don Clarkson and several other councilors, all lookers I presumed. There were only about six or seven others.

One person I did recognise was Amamoor Farmer, Gordon Elmer. I had got to know Gordon and who could miss his farm with a large Ferro Concrete Barge taking shape in the back yard.

Gordon had moved his barge to Inskip Point in 1967 and now two years later was operating a successful Fraser Island ferry service and the farm was falling into disuse. I could certainly understand why he would wish to move to Rainbow Beach.

The Auction got underway on time at 11 o’clock; the land agent first reading out all the many conditions imposed at Government Sales. It started with Lot 1 described as lot 1 of section 2, which today you will recognise as the block on the corner of Ilmenite Avenue and Clarkson Drive across the road from the doctor’s surgery.

The upset price was $630 and the auctioneer called for an opening bid. Gordon’s hand shot up. Further bids were called, all quiet, the hammer fell and Gordon Elmer became the first land owner at Rainbow Beach for the upset price of $630, less 10% if you had cash to pay on the day.

The auctioneer moved to the adjacent lot 2; the upset price was $30 less this time, only $600 – somebody would surely snap this bargain up. The bidding was opened, all was quiet, a second and third chance were offered still no bids and the lot was passed in.

The auction moved to lot 3 and astoundingly the same result. The auction then moved to lot 5. Lot 4 was not offered as it was encumbered by a powerline that Queensland Titanium Mines had built from the the mineral sands dry plant to their houses in Rainbow Beach Road. The power line affected other blocks in section 3 and 4 also.

The auction moved to lot 6, the last in what is now Ilmenite Avenue, I figured there would someday be a road along the front and this would become a corner block. The upset price had risen to $650, but surely this was well worth it. Was I game? With a mortgage in Gympie and a wife and two kids to feed.

The auction opened, no bids at the first time of asking, no bids second time. Gordon Elmer was looking at me with a forlorn look on his face, he obviously didn’t want to be left alone as the only land owner at Rainbow Beach. Damn it, my hand shot up, the hammer fell just as quickly and my wife Lesley and myself had become the second landowners at Rainbow Beach.

How would we pay for it? The Queensland Government did offer extremely good terms and you could pay it off over 10 years if you wished, but it would be good to pay cash and get the 10% discount.

I approached my dad who offered a loan and we were able to pay cash. Having made this commitment I did not pay a lot of attention to the rest of the auction, but can report there were another five buyers, most of whom received their block for the upset price.

I think there was some spirited bidding for the last block lot 7 in section 4, which attracted above $1000. For the Lands Department only selling seven out of 25 blocks was a bitter disappointment and it would be three years before they attempted a second Land Sale.

Gordon Elmer built a house quickly on his land and consequently became the first permanent resident in the town, as well as the first land owner. For us it would be camping for a few years and then an onsite caravan.

There was a building covenant on the land sale which did require the land to be developed to the extent of $2000 in two years. We did test this out but were able to finance a small two bedroom unit by 1972.

The property has been improved and extended over the years, there are now two units there and the property is called Palmgrove, after coconut trees we planted around the perimeter. The property is still in the family although the ownership has changed to our son and daughter-in-law.

Ian has already sent the Community News stories of future Land Sales – and we are happy to preserve his memories and images for future generations. If you have a story to share about Cooloola Coast’s history – please get in touch!