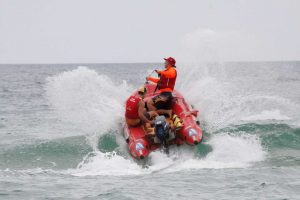 In a coup for Rainbow Beach, our SLSC members like Stuart and Alex Wilson (pictured at our IRB course) will enjoy watching the IRB racing on May 27-28

Council have negotiated Round 3 of the Inflatable Rescue Boat (IRB) Ocean Roar Carnivals to be held in Rainbow Beach, May 27-28.

A high-octane event, IRB racing has a large following in Queensland as competitors from clubs around the state fight it out for surf rescue supremacy.

Aside from the spills and thrills of the competition the event is a real reinforcement of lifesaving skills. The races are all about simulating rescue situations and testing the abilities of drivers and crew people as they’re transferred to a competitive setting.

Ocean Roar is the dedicated IRB competition series which features five rounds of competition throughout the season with each round attracting on average, 280 competitors.

The competition works on a cumulative point-based system with the winning team awarded the Premiership Title at the end of the series.

Council continues to secure events, often like Masters or Junior meets that attract a high number of supporters, to drive visitation even further in the region.