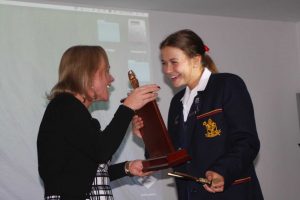 Local girl, Kate Gilmore takes home the Head of the River trophy in a first-ever win for St Hilda’s School.

On the water four mornings a week at 5.15am training in the dark, add to that two gym sessions, blisters, two rowing camps, balancing senior high school work loads and other sports, this group of dedicated young women have rowed in excess of 800km together on the Nerang River at Southport this winter.

Training starts in Term 2, building into Term 3 where 6 regattas are held at Wyaralong Dam, near Beaudesert.

The last regatta is the prestigious Head of the River, where ten schools put forward their best “the First VIII” to vie for the ultimate rowing prize for the Brisbane Schoolgirl’s Rowing Association.

The girls won convincingly, about two boat lengths ahead and breaking the record with the time of 6 minutes 17 seconds for the 2km row.

At the Ammonite Dinner that night, all the crew were congratulated, and Kate was thrilled to be presented with their highest honour, the Ammonite Award.

Rowing head, Adam Harrison said, “It is awarded to the rower who epitomises the St Hilda’s rowing program. An individual who is committed to not only her rowing but the program as a whole, leads by example, and is always willing to lend a helping hand to whomever may need it.”

He said Kate Gilmore is incredibly worthy of this award and has excelled far beyond all expectations.

He said, “Not only has Kate excelled in the boat but she has done it with tremendous grace and humility. Kate has been an outstanding role model for all of her fellow rowers with her kind heart and fierce determination.