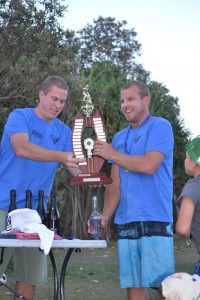 The memorial surf classic was called the “Robbie Pryde Memorial Surf Classic” and has been running since 1986 after “Spot” and other local surfers asked local business owners to sponsor a surf comp.

Sue and Lyn Pryde (had the shop, Snappy Shacks) offered a Perpetual Trophy in memory of Robbie Pryde.

Dennis Parton, good friend of the Pryde family has run the comp since 1987 then throughout the years others had helped including the Mick, Dargusch, Mahon families and many more.

Robbie Pryde’s dad, Alee supported theses classics and presented the trophy for 10 years until his death in 1997 of cancer.

Sue and Lyn Pryde wrote to the Rainbow Beach Boardriders asking Dennis Parton, step father of Matt and Emma Searl who passed away on the 17th of January 2002, to change the name of the classic so the locals who have tragically lost their lives are remembered. Now it is known as the Memorial Surf Classic.

The Robbie Pryde trophy is still for the overall winner. 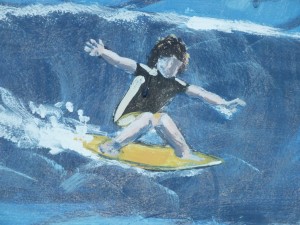 The Memorial Surf Classic is still going strong and is a successful event where locals and friends spend a day together, every year, surfing in the memory of their mates.

Thank you for all the community groups and business that have supported the classic since it started.