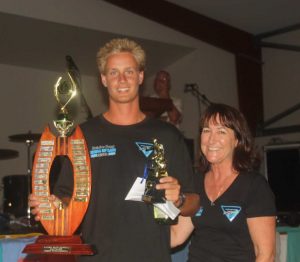 With the surfboards on the roof, the trailer full of eskies and shades, Rainbow Beach Boardriders set off for Double Island Point.

Bj Parton said there were 150 people on the beach and 75 entries into the 30th Memorial Surf Classic. Jake Parton and Simon Mahony had their hands full with organising heats and competitors.

Bj said, “Everyone had pulled together on the day with Michael Findlater keeping judging seats full, and Graham Pamenter cooked a mean BBQ keeping the surfers well fed.”

“It was great to see 30 years of surfers and their families reuniting to celebrate surfing and to remember loved ones and friends lost,” said Bj. “Everyone was glowing and had plenty of great memories to share.” 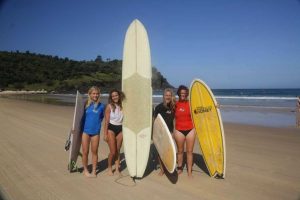 The ladies trophy was taken out by Afrikah McGladrigan, followed by Carly Johnston, Kylie Podmore and Bj Parton

Dennis Parton was in his element being the MC for the evening, not that he was expecting it as Simon Mahony nominated him for the night. Dennis has been there from the beginning of the Boardriders and Simon could not have picked a better person for the job.

“The wonderful Brooke Bignell and Laurel Findlater were the glue that held everything together on the evening with organising the bar and arranging salads. Scotty Fitz knows how to carve meat fast. It just kept coming and was awesome!”

After the dinner and a lot of catching up, Sue Walsh and Lyn Hourn (Skip) presented the trophies.

“They actually had one surf comp in 1985 and Robert Pryde was in it. After his passing, they decided to hold it in memory of his name – and that’s what it is all about. Congratulations to Ryan Cozens, the winner of the Robert Pryde Open Perpetual trophy,” said Bj.

The Jimmy Fitzgerald Perpetual Trophy went to Rob Snape and the Matt and Emma Searl Perpetual Cadet Trophy was presented to Kyani Parton and Alex Wilson.

Ryan Cozens also won the Adrian Apps Perpetual Trophy for highest scoring wave of the day, while the Biggest Wipe Out was awarded to Billy Bob Snape. “Man, did he eat sand that day!” said Bj.

Rainbow Beach Hotel’s custom made surfboard was won by one Theresa Dargusch – “It couldn’t have gone to a better person with all her family’s involvement with Boardriders throughout the years,” said Bj.

“One big cheer to Marty, Terry, Lawton boys and the rest of the clean-up crew. We all survived the day! I could not fit all names on the page as the printers do not have enough ink for all the thank-yous I owe,” finished Bj.