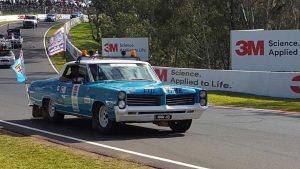 Have you heard of Variety and the Variety Bash? Did you know Rainbow Beach has its own Bashers? Well, we have, and we should all be very proud of these guys.

Back in 1985 Dick Smith decided to hold a car run to raise money to help disadvantaged kids from all over Australia and the Variety Bash was born.

Sam and Maureen Mitchell have been Bashers for many years. This year’s Dusty Swags to Chequered Flags event marked Sam’s 17th and Maureen’s fourth Variety Queensland bash. What an achievement! They have also done two Tas Bashes and four Fiji Splashes!

The Mitchells aren’t the only ones from Rainbow that participate, the “Dodgy” Hayes family have also been along with the best of them, with 18-year-old Caitlyn joining mum Andrea and dad Dean for her virgin bash this year!

Maureen travelled in OP3, an official’s car that was responsible for providing fun and games. They organised everything from blind boxing to thong throwing.

“The cars could join in to raise more money for their team, I never laughed so much, the fun events were hilarious,” laughed Maureen.

Sam’s most memorable moment was driving the Pontiac around the track at Bathurst, which was an honour awarded to the top ten fundraisers.

”It was a once in a lifetime experience, it was fantastic,” said Sam. “It took about 15-20 minutes to do the distance, my lap was dedicated to Graham Jackman who introduced me to the Bash in 1999.”

Sam and Maureen raised money by selling tickets for a holiday at the Remote Resort in Fiji valued at $4000. He sold 400 tickets, and drew the raffle on the last night.

When he drew out the winning ticket, his heart skipped a beat…oh no …. the winner was Dean Hayes in Car 48 from Rainbow Beach. ”I couldn’t believe it!” said Sam. “Of 400 tickets sold to people from all over, Dodgy Dean wins it!”

The Dodgys loved every minute, from the breathtaking scenery on the way to the fun and excitement of Bathurst. “Seeing the pledges being handed to well-deserving families and communities is always a highlight,” states Andrea.

Cait said, “There are certainly some interesting characters involved, but they are like one big family, it’s like they have known you forever.”

Cait was inducted as a Bashee with a baptism of water at the pub in Yeoval in NSW! Would you do it again Cait? Yep definitely. In fact, the whole crew are doing it again next year for the Surf & Turf Bash from Caloundra to Airlie.

I think Maureen sums it all up nicely, “The real highlight was that altogether we raised $1.45 million, all of which goes to kids, families and communities that need a hand…that’s the best part for me.”