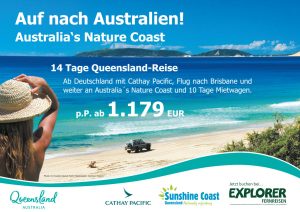 The Gympie Region and in particular Rainbow Beach this week continues its time in the limelight in Europe as it is promoted in the same breath as Cairns and the Whitsunday’s in Tourism and Events Queensland’s Queensland on Tour in Europe this month.

While the temperature was soaring over 30C back home, the thermometer was plummeting below zero in Germany, making the billboards featuring Rainbow Beach an even more attractive proposition for snowed in Germans. In partnership with TEQ, Cathay Pacific and Explorer Fernreisen, a German travel agency, the billboards are promoting the Australia’s Nature Coast.

Australia’s Nature Coast is a joint marketing partnership between Visit Sunshine Coast (which includes the Gympie Region and Noosa) and Visit Fraser Coast, and their representatives were visiting Germany as part of Queensland on Tour Europe 2017 trade mission organised by Tourism and Events Queensland (TEQ).

Mayor Mick Curran said “We are so proud of our region and its position in the Australian Tourism market. This campaign highlights Rainbow Beach and the Gympie Region as a world class destination and puts us on the map.”

“Tourism attraction and development continues to be a major focus for our Council in 2017 and we remain committed to our partnerships with the Visit Sunshine Coast and Tourism and Events Queensland.”

In addition, a NZ campaign in a partnership between TEQ and Air NZ is also about to hit the streets featuring Rainbow Beach as the hero image.

Images of the Gympie Region are currently being used in the two international campaigns and TEQ believe these campaigns will put bums on seats.

The European tour took in Germany, Italy and Switzerland and coincided with Europe’s coldest snap this winter, with the snowflakes providing the ideal backdrop for Queensland’s ‘sunny’ message.

The Australia’s Nature Coast concept has achieved major traction in Europe, combining regions to mirror the travel patterns of many European travellers.