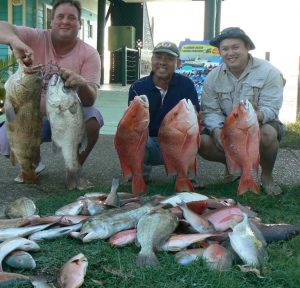 Mick with his cod and 4.7kg pearl perch, Nguyen and his father with a nice haul.

It’s been a couple of months on the water, so the relaunch of the new look Baitrunner was an exciting day. Many thanks to Mark Parry and his team for an excellent job and great advice.

All keen and itching to get amongst some decent fish and along came the cyclone which had me cancelling the first lot of charters.

Finally a break in the weather and we were off and into it. Over a few days we fished north along Fraser in search for some big fish, not quantity but quality; live and dead baits were both working and in came some nice fish which included red emperor, cod and scarlet sea perch.

We searched and found some new ground holding bait and in came a few more nice red emperor.

We also fished east out wide with the same results, good reds, scarlet’s, sweetlip, cobia, parrot, cod, and pearl perch, one of which went just under 5kg – well done Mick on that one!

Another day we tried in a bit closer and still found good fish, however too many decent fish were getting dropped and shutting the bite down and a lot of moves had to be made.

Overall the fishing has been great, the boat’s great and looking forward to a good season.

Wish I could put more pics in for you, but you can find them on the Facebook page.

Hope you all had a safe and pleasant Easter, cheers until next time!