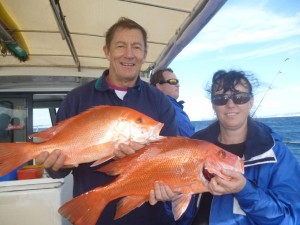 Well over the last month the weather for going offshore has either been brilliant, or just terrible as numerous highs have produced very strong Southeasters, but producing only slight Swell.

It now looks like the Souwesters are starting, so offshore fishing should fire up, as water temperatures start to drop.

Offshore catches have improved towards the end of June after a slow start to the month.

Snapper have now started to appear ,and along with Parrot, Moses Perch, Hussar, Gold Spot Wrasse,and Pearl Perch have been our major catches.

Pearl Perch have dominated catches on the closer reefs, with Snappery Squire also appearing in better numbers. Scarlet Sea Perch, Sweetlip and Moses Perch have also been making up our catch from the inshore reefs. 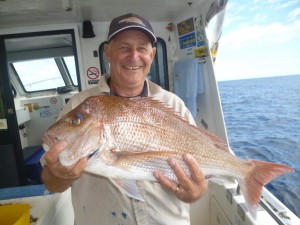 In closing I must mention the retirement of Senator Ron Boswell and what a great loss he will be to many of us  as he has been such a great advocate for the Fishing industry. You may remember the proposed Fraser Island AFFA ,well he fought so hard to restrict the Labour Government and Greens proposed closures, not only here but Australia wide.

The last time I met the Senator was at the Clontarf Rally where he spoke so well. He has been a fare dinkum hard working Aussie,so if you get the chance to thank him—DO.