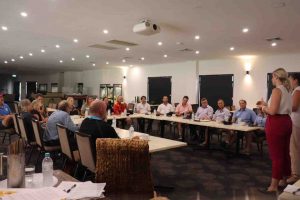 Attendance rates were high at an independent review for the Fraser Island K’gari bushfire, held at the Rainbow Beach Sports Club last month

When it comes to government bodies, the Cooloola Coast is largely ignored, with one attendee calling Rainbow Beach “a black hole” for the government.

Local resident, and Fraser Island Beach Houses owner, Nigel Worthington attended an Hervey Bay meeting about the K’gari fires. He found out about the meeting secondhand.

Both the tourism and local government authorities are based on the Fraser Coast. Rainbow Beach is not in either.

Nigel, who is Rainbow Beach Commerce and Tourism President said, “It is not immediately obvious on higher level state government, the impact Island closures have on Rainbow Beach as a major supply and tourist route.”

At that meeting, Nigel and CCQI Chamber of Commerce Queensland representative detailed that 80% of the vehicle traffic to the island comes from Rainbow Beach.

He said in 18 years, he has never been notified about closures or disruption to his business.

For the first time, Rainbow Beach was consulted about K’gari Fraser Island and recognised, through a government inquiry, as a gateway to the iconic destination.

Possible solutions and ways to progress, especially with communication, were discussed at length.

Meanwhile, we’ll wait for the outcome of the inquiry on March 31. Will anything change?