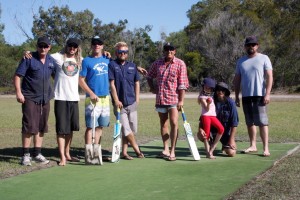 This cricket season, the action will be much closer to home!

Rainbow Beach and Tin Can Bay both have a side and will be competing for the lucrative Coastal Cup. Sponsored by the Community News, it will start mid month.

It all began when Merv O’Neill said he wanted to play cricket again, “All the boys from work [Rainbow Beach Adventure Centre or RBAC] were interested. Even though there are lots of us from RBAC, it is a town club –  it’s not exclusive.”

Captain Merv is joined by Steven Hiley as treasurer  and Mick Lattanzi as secretary, and so far they have 18 men interested.

You need to be a minimum of 14 years old to play, but they invite kids to training Thursdays at 2.30pm, “You are all welcome to have a hit – we may have a junior team down the track,” said Merv.

“Council have big plans to fence the ground and when we become incorporated we’ll be looking for funding to build a permanent clubhouse.”

Merv said the school have been very supportive and they are grateful to their sponsors, RBAC, the Sports Club and Rainbow Beach Meats.

There will be a mix of two-day (played over two Saturdays) and one-day games in the Gympie B Grade competition. October is full of home games – you can cheer them on, on Saturday 3, 10, 17 and 24, from 12.45pm.

“Everyone’s welcome – players, supporters, volunteers – there will be raffles and a BBQ, so come along and enjoy!”