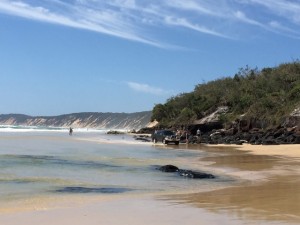 State Member for Gympie Tony Perrett has called on the Queensland Government to rule out reinstating fees for residents of Rainbow Beach to access the Cooloola Recreation Area.

Mr Perrett said that the fee exemption for Rainbow Beach residents was under threat with a Parliamentary committee report calling for an investigation into users of the exemption and a review of the permits over a two-year period.

“They have let the cat out of the bag,” Mr Perrett said.

“The recommendations of the Parliamentary Agriculture and Environment Committee Report No 3, which was tabled yesterday, have been produced without any input or consultation from locals or the Gympie Regional Council.”

“It is clear that the Committee, on behalf of the Government, is searching for evidence to re-introduce charging fees for Rainbow Beach residents to access shops, facilities and services at Noosa.”

“The Government has closed off avenues for raising much-needed funds by pandering to its unionist mates, and is now searching for evidence to justify charging Rainbow Beach residents,” he said.

“There is an obvious implication in the committee’s recommendations that residents of Rainbow Beach are somehow not genuine residents, or that their use of a legitimate road is somehow resulting in environmental and public safety issues.”

“There is some sinister implication that a community which had according to the committee’s own report some 451 residences or 700 vehicles in the 2011 census, had been issued with 257 fee exempt permits which is 36% of all vehicles.”

“I cannot see how 257 fee exempt permits indicate any sort of over use of the scheme.”

“There are more than 1,200 electors on the rolls in the Rainbow Beach area  which is more than 1,200 people who are over the age of 18, and assuming many of them can drive, 257 permits is not excessive.”

“I am very concerned that this measure is an attempt to appease city greenies.”

“I am calling on the Government to rule out reintroducing fees and will be watching closely to make sure that Rainbow Beach residents will not be unfairly penalised in a bid to both appease environmental  activists and make up for financial shortfalls,” he said.

The previous Labor Government introduced fees in 2010 under the Recreation Areas Management Act.

The LNP Government changed the regulations to allow locals to apply for a fee exempt permit so that they could access roads which they had previously used in the conduct of their daily activities.

“……that the Minister for Environment and Heritage advise the House of what measures are in place to ensure that only genuine residents whose primary place of residence is Rainbow Beach have been granted fee exemptions.”  and

“.….(that) the Department …… undertake a review of vehicle access permits  for the Cooloola Recreational Areas at 12 and 24 months from the commencement of the regulation…….to ensure that fee exemptions are not leading to unsustainable vehicle access or any public safety and environmental impacts…..”