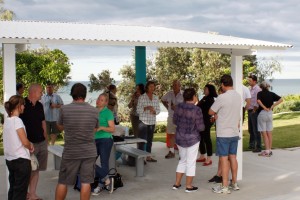 Last month about 20 members attended a relaxed social meeting over a Sunday afternoon BBQ and drinks with the Mayor and three councillors.

This was a good chance for members to not only meet the new Mayor but to express to him the issues affecting our community. Everyone enjoyed this meeting and all thought we could repeat the occasion later in the year.

Correspondence from council has been received on five issues:

The long-term plan pending a Council decision is to close the landfill and convert it to a fully supervised bin site. Council staff are presently preparing the rehabilitation plan for Rainbow Beach landfill, cap design and post closure care plan.

Issues were raised to Council about the unsightly, unfinished site. We were hoping to get shade cloth or hessian on the fence before Easter.

But, the manager of the building branch replied on March 13, stating that the building work did not pose any risk to surrounding properties or the general public using the footpath.

The site was securely fenced to prevent access, was private property and Council did not have any ability to make alterations to the fence, although admitting it was unsightly.

Finally, this does not clarify the situation so we have to contact the writer!

Council was asked to consider some short-term customer parking outside the hotel complex to allow aged and wheelchair people easier access to the Post Office.

We have been advised customer parking is available on the southern side of the shopping centre and the car park has wheelchair access to the rear of the arcade.

Council was asked about the possibility of LED lighting the ‘Entrance’ sign. Options on this are being further investigated.

Council was again asked about the ongoing illegal camping in town after more complaints were received. At our request patrols had been increased.

Lockable gates are being investigated for the car park. All these issues will again come before our next meeting.

The future of Ex-Rainbow Shores Golf Course land is now in the hands of the Labor government who are in consultation with the Dept of Natural Resources. A lot of people have been working on hopefully a positive outcome including our local Member, Tony Perrett.
More images: www.facebook.com/RainbowBeachCommunityNews