Since our last meeting I have written to Council on the following matters: 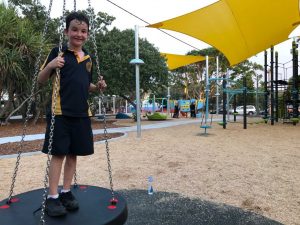 Jack, like the rest of town is loving the new park!

There were two other matters which I have spoken to Tony Perrett about. Firstly the speed of entering town, as it had been mentioned at our last meeting that we needed a calming device or a lower speed limit.

I mentioned the danger to children crossing the main road also, and this problem has been conveyed to the Minister of Main Roads on 3rd July but no reply has been received yet.

In the matter of more overtaking lanes on our road I have been advised there is no funding from the State Government in the next four-year planning and design works on our road.

I have since written back asking for some pull-off areas with signage for slow vehicles to let traffic pass.

Maybe circulation of a petition in September for the above or wait for a change of government is the only hope!

The following meeting will be an AGM, please contact Tony with agenda items for general business: 0408 767 930

What are the stats on tourism?

The number of visitor nights spent in the region is approx 1.3m and estimated spending associated with the visitor economy is $271m.

Last month, Destination Gympie Region spent three days in Sydney meeting with the premier inbound tourism organisations in Australia. We had one-on-one meetings with owners, product and general managers of the largest ITO’s in Australia, and did training for over 50 staff across the companies.

The trip was very worthwhile and we spent up to two hours at some companies talking to them about the region and Rainbow Beach.

Rainbow features on Great Day Out

Great Day Out (old Great South East) filmed in the region last month, so look out for it.

Sofie Formica and the crew stayed at Rainbow Sea, did a horse ride, and kayaked with dolphins where they had whales swim under the kayak.

Andrew Saunders from Destination Gympie Region said they loved their time in Rainbow and reported that they thought the whole experience was amazing.

It is due to be aired early this month on the Seven Network.

Seafood Festival is on September 23

Who’s New at the Zoo?

Community groups and newbies to town – keep the date clear on November 4 for a RBCT welcome dinner with a difference! To find out more contact Michelle at the Rainbow Beach Cooloola Coast Community News on 5486 3561.