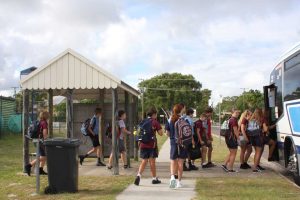 An Open Letter to the Gympie Regional Council.

With the onset of the wet season, I would like to draw your attention to the school bus stop on Rainbow Beach Road. It is a disgrace.

There didn’t seem to be a problem building a half decent one for the backpackers across the road, while 30 odd school kids cram into four sticks with a roof built for six.

An efficient new shelter would not go astray – alternatively simply shift the bus stop across the road to the Community Centre where there is ample shade and shelter and which would incur little or no cost – makes sense to me.

Council have responded, “School bus stop locations are controlled by the Department of Transport and Main Roads. Council and TMR have good relationships with bus operators in the region and operators generally identify user issues with us as they occur.

Neither Council nor TMR are aware of any previous complaints about the stop location or shelter on Rainbow Beach Road, however, Council officers will discuss Mr Walliker’s concerns and suggestions with TMR and the bus operator.

Local, Heather Robertson, also called to ask for action on the bus stop. We sent the same suggestion to Warren Polley, at Polley’s Coaches when Bob last suggested the move, in December 2016.

At the time, Warren advised:

I have been in discussion with GRC about this. They would prefer to simply remove the wooden bus shelter completely so they don’t have to maintain it. Their preference to utilise the shelter in Spectrum Street.

There are a number of reasons for using the current wooden bus stop: 1.) It has been in use forever and a day;  2.) The catchment for that stop is all around Bombala, Tingara and Rumbulara, Double Island Drive, etc, and 3.) It’s the last stop before heading to TCB/Gympie and two Polleys buses make their connection there.

The problem with the Spectrum Street Backpacker Bus shelter is that coaches are there at the same time, so we would have three buses lined up and no one can leave until the first bus pulls out as the street is too narrow.

In discussion with Warren last week, he said, ”My drivers would be happy with any upgrade but definitely don’t want it over near the backpackers. That street is a nightmare to navigate, it’s narrow, one way and at its busiest when we need to be there for the school runs.

“So our preference is to have the Council either expand the wooden shelter and make more undercover space or to build a proper off-street, pull-in bus stop on Spectrum Street that allows buses to pass.

“I will endeavour to raise your concerns at a meeting I have every three months with council as see if we can access some State Government funding as I know GRC don’t have any in their budgets.”

We clarified that the priority for now was simply utilising the Community Hall eaves for protection in wet weather. He plans to consult with his drivers and advise on possibilities next month.