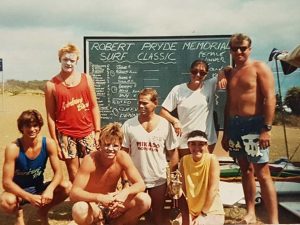 Tragedy in Rainbow led to what has now become part of our local lore. In February 1985, local lad Robbie Pride was killed in a motorbike accident on Carlo Rd. Robbie was a mad surfer and loved to get out with his mates for a surf.

In 1986 Agnes Waters Boardriders came down to Rainbow for a bit of a surf and some fun and the Rainbow Beach Boardriders and Robbie Pride Classic was born.

As Dennis explained “It was a great way to remember Robbie and get together for a bit of fun and competition.”

In 2002 Robbie’s sisters suggested that the yearly comp be renamed the Rainbow Beach Memorial Surf Classic and be dedicated also to eight other young locals that had been taken too soon, and that is how it is run today.

“It has always been a great weekend for everyone. We have chased the waves all over D.I. and even gone down as far as Noosa North Shore to get a good surf,” continued Dennis.

“I think the first nine comps were won by Spot, he was a classic and a fantastic surfer. We have produced some really good surfers from Rainbow and they all were a part of the Boardriders at one time or another!”

30 Year Memorial Surf Classic on December 3
The Classic at Double is followed by the Presentation Dinner at the Community Hall from 4pm. I have put it into place from the start: it is invitation only to the past and present surfers and their families.
Due to us not having details for everyone, it was said in meetings and past Community News that an invitation wasn’t just a piece of paper, it was word-of-mouth from one boardrider to another.
Please come along to remember those lost, and carry on the wonderful tradition of Rainbow Beach Boardriders. Looking forward to seeing you all there! Please do not hesitate to call me for inquiries, Bj Parton: 0419929037.

The Boardriders is still going strong with mini comps being held throughout the year, as well as comps especially for the grommets. There are no separate ‘Girls and Boys’ heats as such. Everyone gets in and surfs together.

“The Surf Club was really involved in the early years,” said Dennis. “We used their trailer to get the boards and gear to Double, and used to hold the presentation at the Club, which was great.

“In fact the competition wouldn’t have kept going if it hadn’t been for the support of the local businesses. I think every business in Rainbow has contributed over the years with raffles and prizes and food and drinks all being donated. We couldn’t have done it without the community involvement.”

In usual Dennis Parton fashion, what he fails to talk about is the fact that the Parton’s have played a very big part in the continuation of the Memorial Classic.

Dennis is one of the founding members and the tradition is being carried on with his son, Jake, and daughter-in-law BJ, taking over the reins, and the grandkids all being keen surfers and competing every year. That’s three generations still involved…wow!

And THAT is the essence of the Boardriders, good old fashioned fun that can be enjoyed by the whole family…for years to come.