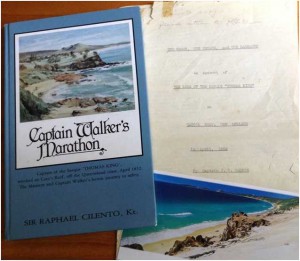 The next time you stroll past our beautiful Coloured Sands, spare a thought for Captain James Henry Walker who walked more than a marathon from our beach after a shipwreck. His great, great granddaughter Helen Ruby from Toowoomba visited Rainbow Beach to investigate more of where her forebear journeyed one hundred and sixty-four years ago.

On April  17, 1852 the barque Thomas King ran aground on Cato reef off the coast of Gladstone. When daylight broke, they saw the lifeboat drifting away, with five crew members on board.

“The Captain and another man stripped to their trousers and swam with an oar each,” explains Helen.

“They eventually had to walk across some of the reef in the process. It leaves little to the imagination as to how their bare feet suffered because of this ordeal.”

Without water on the island, it was decided that the captain and five crew members and a passenger set sail in the lifeboat to try and obtain help. They intended to get to Moreton Bay Settlement.

However, by the time they reached Inskip Peninsula, and unable to land because of the Wide Bay Bar, they managed to get further south to the north side of Double Island Point.

Do you have stories and photos from the Cooloola Coast?

Our living history – it could be from the 60s, further back or even significant events just a few years ago!

Gympie Regional Libraries are using the National Trust theme of Discovery and Rediscovery to highlight the history of the Cooloola Coast.

They are working on displays, information sessions and opportunities to gather stories and photographs from the community in relation to history and events that have occurred in the Cooloola Coast region from before the settlement of Europeans to now.

If you wish to contribute to this exciting project please contact Beth Wilson at the Gympie Regional Libraries on 5481 0859.

It was here that they were forced to abandon the badly leaking lifeboat. They had rowed and sailed for 327 kilometres.

“But this was not, by any means, the end of their ordeal.  Walker was his name by ancestry, but for weeks to come, he became a walker by circumstance,” says Helen.

“There was no other way to reach help, but to walk from their landing point to the Moreton Bay Settlement – a distance of 241 kilometres.”

The Captain was only forty at the time and had been at sea since a young man, so walking on sand and rough country was a far cry from the streets of London and Sydney and the decks of ships. Yet alone the condition of his injured feet.

“The next disaster struck when they got to Teewah, as a group of natives attacked the party and robbed them of their possessions, which included all their personal papers and the meagre rations they were able to carry from the wreck.”

Helen continues, “On the north bank of the Noosa River, they were pursued again and robbed of their clothing. These attacks continued and on the east side of Lake Weyba Captain Walker and another man, Howard, were clubbed and injured.

“At this historic time of white settlement in the area, there had been murders by the white men so it may have been pay back, and unfortunately for the Walker party, they were hunted and five of the men were killed.”

Captain Walker and a crewman, Sherry, miraculously escaped, unknown to each other, and separately trekked south.

Helen comments, “My great, great grandfather had a strong Christian faith and he later said that was what kept him going. He also had left some of the crew on Cato Island, so felt responsible to get help for them.”

Unbeknown to him, it had rained two days after they left and the crew saved water in the sails and containers they set up and they were rescued by a passing whaler, only ten days after the wreck.

Following the massacre, by a twist of good fortune, the natives that Walker later encountered were friendly and helped him at their camp.

It was a miracle that Sherry was reunited with his captain and told him of the ordeal he had as he headed inland, so as to avoid the coast.

After the many weeks of walking, pain and suffering, they reached the Moreton Bay Settlement on the Brisbane River, four weeks from the time of the shipwreck.

It took Walker three months to gain his strength again, but he felt the effects of the club blow for the rest of his life. He returned to London and brought his family to Sydney where he died at the young age of forty-four. 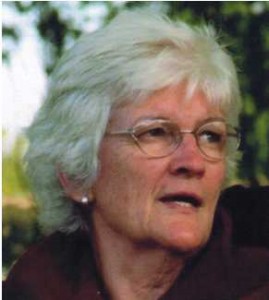 Helen has been one of the family historians since 1967 and the first article that she received to start her on this interest was a very old typed transcript of Captain Walker’s written account that was later edited and typed by the Rev. Joseph Binns of the Wesleyan Thames Mission – unfortunately there is no date on this piece of history.

From that account, another family historian, Sir Raphael Cilento wrote the novel Captain Walker’s Marathon, which was placed in many libraries and Helen has one of the original books.

“My time at Rainbow Beach was worthwhile, as I walked part of the beach and gained a sense of how it must have been for my brave ancestor. If he hadn’t made it, I wouldn’t be here today,” Helen said.

If anyone would like to contact Helen about this part of the Rainbow Beach local history, please ring her on 0448 979 806.