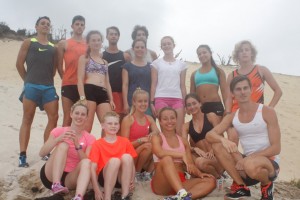 If you saw a group of fit young bodies striding on the beach or towards Inskip Point, they may have looked familiar.

It is the fourth time Athletics Australia coach, David Smith, has held his race walking camp in Rainbow Beach. When asked why he keeps coming back here, he said, “Because it offers beach and bush, road and trail runs as well as sand dunes.”

The coach says Rainbow Beach is a wonderful environment that ticks all their boxes.”It is vital our athletes prepare for competition without distractions.”

It seems their only distraction is an occasional dinner out and a break from preparing their own meals.

The 24 athletes (plus some family members) travelled from Tasmania, Victoria, New South Wales and around Queensland. Participants are preparing for the World Championships in Beijing, the World Student Games in Korea and the World Youth Championships in Columbia. Other members of the camp are Australian or state champions. Distances range from 5 kilometres to 20 kilometres.

“This is the only camp we hold, and this year it has been extended to three weeks, rather than two. It is proving so popular, we have even had to knock back some applicants – it is also attracting runners and triathletes.”

The senior and junior competitors were here for much of January, completing training early in the morning and late afternoon.

We wish them well in their upcoming competitions, and look forward to seeing many of them return next year!