Home  »  Community   »   Questions fly in the lead up to ANZAC Centenary 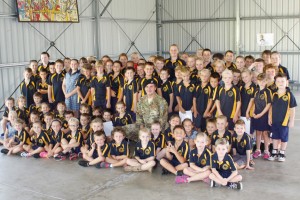 Trooper Branden Robb gave Rainbow Beach State School students an insight into life in the forces when he came to thank them for their support to his platoon in Afghanistan.

“We got all your Christmas letters – they were lovely. We don’t speak to our families much when overseas, so they meant a fair bit – it was unbelievable.”

The soldier was back home visiting parents, Brad and Heather, in Cooloola Cove before returning to his current base in Townsville and his job driving Bushmasters – light armoured vehicles.

The children made the most of the visit and were given open slather to ask away. Pearlers came through like, “Did you go to war?”, “Were you with your friends?” and “Did you shoot any baddies?”

In the lead up to the ANZAC Centenary, Rainbow Beach RSL Sub Branch is currently working on a ground project for the Rainbow Beach State School.

Work has started on the cenotaph and flagpole and is being coordinated by welfare officer, Bob Bliss and Kevin from Wallu Nursery.

RSL member Darren Davies said, “It is a smaller cenotaph for school students to hold their own ceremonies such as ANZAC Day, essay comp day and flag raising events.”

“We are trying to find links between past Rainbow Beach school students (alive or passed on) who have WW1 or WW2 relative connections, but the town’s main cenotaph is the only place for dedicated attached plaques which are authorised by Department of War Graves in Canberra. We will have a larger plaque attached to the school monument.”

This project is located near the assembly area, and should be completed by Anzac Day 2015.