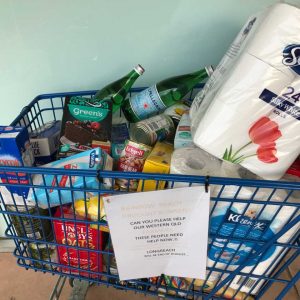 As I write of course most discussion taking place is of the terrible floods and shocking loss of livestock, fencing and the loss of beloved animals by farming families in the North. Some stories I have heard are beyond repeating, it makes you sick in the guts..

Still the Queensland drought is far from over with many areas receiving little or no rain.

I hope everyone realises about 3/4 of the state is still in drought and a lot of NSW.

Just returning from Victoria I have passed through many districts and spoken to some farmers facing no future and others in parts of Victoria that are in great shape.

Whilst in Victoria, I posted a letter in a Western District paper and have returned with some much needed donations. Whilst talking of donations I must thank the TCB CWA,Wayne in TCB for collecting, the TCB Blackpowder-Sporting SAA, the Falconer family, Cindy in Gympie, Bev Yeoman, Betty Freeman, Bill Neil, TCBay Craft Club, Kay Shaw, Jean and Ces, and the IGAs also for collecting.

Many of the above gift wrapped lovely presents for farming families and these were distributed throughout the Longreach Shire. Many thanks to the Tramacchi family, Widgee Engineering, and Owens Bearings in Gympie for their deliveries. Last month we are posted 50 x $100 vouchers which will be distributed to farming families from Blackall-Windorah-Longreach and as far as Winton. The work goes on.

Finally, if anyone has any time in the near future to help with fencing in the flood area please call BlazeAid 0418530471, or get in touch with me (0408767930) Tony Stewart, Rainbow Beach Droughtrunners – follow us on Facebook.