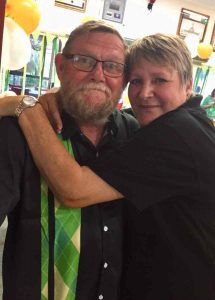 The heart of Tin Can Bay RSL: President Don with wife and Sub-Branch Events Coordinator Viv

As I enter the Tin Can Bay RSL to attend its annual St Patrick’s Day event, President Don, resplendent in his spanking new Shamrock themed shirt, strides past on a mission. Don’s wife, Viv, hurries past in the opposite direction heading determinedly for the kitchen.

“Hey, you two,” I sing out, “I need a photo.” They embrace lovingly as I take my shot, then resume their endeavors. Whatever they were doing, it worked, because it was a cracking night enjoyed by all.

Don Holland joined the Australian Army as an infantry soldier in 1977. In 2007 he retired after 30 years as a Warrant Officer Class 2, his last posting being range manager of the Wide Bay Training Area.

Don served all over Australia in his time with the Army. He met Viv on a blind date whilst posted to Melbourne in 1998 and they married in 2006.

Don has been Tin Can Bay RSL Sub-Branch President since 2020.  It’s a real family affair with Viv ultra-busy as the Sub-Branch Events Coordinator and daughter Darah does a great job working behind the bar.

Between them they volunteer on average 130 hours per month. However, it’s a labour of love.

As Don said, “I really enjoy being involved with the RSL, supporting our veterans. 2020 was a trying time, however now the RSL Sub-Branch has moved on from that and is going from strength to strength.”

Well Don, Viv, and Darah, we appreciate your efforts.  Thank you for your service!