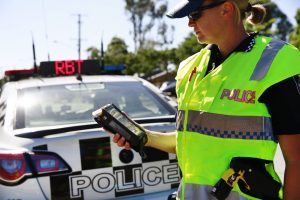 By the time you read this, the Australia Day long weekend will be over for another year (thankfully), and the town can breathe a collective sigh of relief now that the ‘silly season’ is officially over. As the last of the flag-bearing Nissan Patrols roll out of town, I’m sure most of you will be looking forward to quieter roads and beaches…

For police, the roads and beaches have been particularly busy, with a large number of drivers caught doing the wrong thing. To give you an idea who you have been sharing your roads with, the following results were achieved by just four officers who visited us over a six day period from Boxing Day.

These drugs (particularly the ‘pills and powders’) are a major cause for concern. Last month Mike mentioned a spike in drug-related incidents, and appealed for any information to assist us in getting rid of the dealers.

I’m pleased to report that quite a bit of quality information is now coming in via Crime Stoppers and has already resulted in search warrants being executed for both illicit drugs and prescription-only drugs being sold on the black market.

I’ve previously come across people selling painkillers and anti anxiety medication, but I was quite surprised during one search to find a 24-year-old local man in possession of Viagra. Yep, you read that correctly – he was 24! Perhaps he has aspirations of becoming a hardened criminal…!

And, if that’s the case, he may end up sharing a cell with his 21-year-old mate – who decided to stab someone on New Year’s Eve. If you somehow missed it, Rainbow Beach made headlines for all the wrong reasons when a tourist was literally stabbed in the back during an unprovoked attack. The ‘former local’ has been charged with wounding and is facing up to seven years in jail.

I emphasise ‘former local’ because that is the good news part of this story: he no longer lives here. In fact, both of the aforementioned men are rumoured to have left after they received plenty of feedback from the community, who conveyed the message loud and clear: ‘you are not welcome here’.

With them gone, and Australia Day behind us, it may be tempting to sit back and breathe a sigh of relief that the ‘silly season’ is over. Yet our experience is that ‘silly’ happens at any time of the year – and drugs are often the common denominator. Australia Day bogans may affect a few of us for one day of the year… A drug problem in town would affect everyone year round…

Please continue to call Crime Stoppers (1800 777 000) with any information about suspected drug dealing (or indeed any illegal activity).