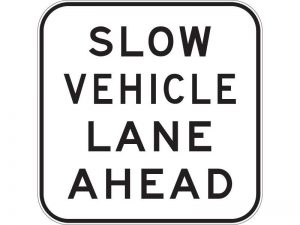 You find these stopping bays all over Australia, they would have been a economical solution for our coast – but now government has changed their mind, and there is no options forthcoming for slow traffic on our roads

Last year, Transport and Main Roads (TMR) wrote to Rainbow Beach Commerce and Tourism (RBCT)  “pleased to advise the department is investigating your suggestion for short-stop areas where slower vehicles can allow faster vehicles to pass” and “locations on the Tin Can Bay Road and funding opportunities are being sought”.

RBCT Secretary, Tony Stewart, appealed to TMR that a 300 metre stopping bay sign and short pull-off areas, seen in many instances across Australia, could be a solution for the slow  recreational vehicle traffic to our towns.

He says, “After many calls and visits to Department of Main Roads, they have gone back on their word. I am wasting time.”

In an about-face, months later, Tony has received conflicting and futile news, which said “TMR is undertaking planning to install overtaking lanes on the Tin Can Bay Road – they are considered the safest option for vehicles to pass slower motorists.”

Of course, there is no money for overtaking lanes in the next four years, and it seems, even if there was cash available, it would be siphoned off elsewhere.

Tony implores, “Rainbow Beach is too dangerous not to be installing overtaking lanes.”

He says numbers of tourists are increasing, but it doesn’t correspond with conditions of the roads. The issue of slow traffic has been escalating as tourism increases in this area, and he believes that road traffic is recorded at an absurd time, because during peak times, figures could be at least ten times higher.

“But TMR says overtaking lanes on the Tin Can Bay Road are not a priority,” says Tony.

He was informed: “TMR is taking every opportunity to seek for funding Wide Bay Burnett, allocated based on statewide priorities, with many safety projects being considered a higher priority at this time” (dated January 2018).

“An average of 64 vans per day that may average 80km per hour – and that doesn’t count Standown Park and Tin Can Bay!”

He wrote to TMR about his figures and told them, “Added to this is all the heavy traffic from the dump waste from the area, now our local tips are closed, further to this is the cartage of ilmenite from Rainbow Beach in dog trailers, these vehicles travel fast.

“Then you throw in the tour buses, school buses, slow backpacker traffic, large boats and what a recipe for disaster!

“It is no wonder the locals are worried about travelling OUR road.”

RBCT executive have asked MP Tony Perrett to follow up on the state of our roads.

Until changes are made, please drive with patience, and overtake with caution. And to everyone driving recreational vehicles – or just a slow vehicle –  please pull over if it is safe to do so, and let the traffic through!