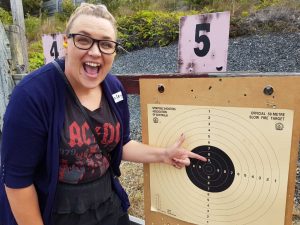 The inaugural SSAA Tin Can Bay Branch Open Day was a hive of activity with over 60 people attending the range. People from near and far were drawn by the chance to sample several different shooting disciplines as well as archery.

The .22 rifle was a hit with many first-time shooters scoring well on the target. Air rifles were aimed at metallic silhouettes and the nifty string-pull system enabled the targets to be hit and reset without closing the range. But only if the string wasn’t accidently hit and broken! Air pistol was also very popular with a line-up waiting to try.

Over on the archery range there were all ages trying their hand nocking arrows and drawing the bow. There may not have been any bang, but the activity was a blast!

However, the kicker of the day was the shotgun shoot. Trepid participants watched the action but eventually braved the action, and were rewarded with the thrill of ‘hunting’ an orange clay target flying through the air.

After lunch the bottom range opened up for rim and centrefire pistol. There were firearms including .22 and 9mm available to try which kept the crowd occupied for the afternoon.

Comments received on the day included ‘had the time of my life,’ ‘liked the variety of firearms,’ ‘friendly and welcoming for newcomers’ and ‘fantastic idea and a great day out!’

Branch President Brett Whiting and Secretary/Treasurer Jenni Ingram were thrilled with the turn out and hope to make it an annual event! A special thank you goes out to all the range officers and club members who made the day possible by giving their time to share their passion and enthusiasm for sports shooting.