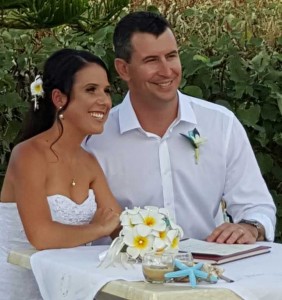 Their ceremony was held on the headland at Rainbow Beach overlooking the ocean in front of their 120 guests.

A lot of people in Rainbow Beach will remember Joshua who attended Rainbow Beach State School, boarding school in Toowoomba, university in Rockhampton,and had various jobs in the town.

Josh and Kelly met at detective training at the Police Academy in Brisbane and are now both detectives in Noosa.

The reception was a great party at the Rainbow Beach Sports and Recreation Club; fabulous food, inspirational speeches and music provided by an amazing band called “Classic Creedence”.

On Saturday guests attended a recovery afternoon at the pool with a cool swim, drinks and a sausage sizzle and most of the guests left on Sunday. It certainly was a weekend to remember!

Josh and Kelly will travel to Italy and Greece later in the year for a delayed honeymoon. They are wished much love and happiness from their families and friends.