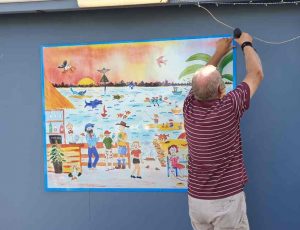 The yacht club now has a new sign at the entrance and a new LOUD hooter to signal that a boat has crossed the finish line. This is situated on the corner of the deck, so beware anyone in the vicinity around 2.30 – 3pm on a race Sunday that your tranquillity will be intermittently interrupted.

Ten boats including five Flying Fifteens started in the shifty 10 knot E to SE breeze with the first race starting off at the Clubhouse and then out the creek and around the cans in the northern inlet.

The top mark was a little crowded with Relience, Bubbles, and Second Safari vying for honours around the first mark. The run to the bottom mark was tight for a spinnaker run with the majority of the fleet sticking to a 2-sail reach.

Relience rounded the bottom mark with a clean set of heels and took out both line and handicap honours, congrats to Nicky Magyar and Crew Les Kearney.

With wind shifting further to the east the second race was primarily a series of 2-sail reaches around the paddock with a spinnaker run into the creek to the finish.

Relience again showed the way to the finish line to take line honours by 2 seconds ahead of Cool Bubbles and Maggie Grace snapping at their heels only a further 2 seconds behind. Russell Shannon’s new boat, Maggie Grace taking handicap honours from Relience.