Marc, Tristan and mum Carolyn relax at home – the family express their most sincere thanks to Marc for his ongoing support

Tristan Sik, my son, was your average, smalltown, 13-year-old boy who loved motorbike riding, camping, fishing, skim boarding and anything outdoors, until he was involved in a terrible road accident that changed his life forever.

Trist was saving for a surfboard and had been doing some work in our family business to earn money. On the morning of July 15, 2017, he texted me from his friends house, telling me he would be home soon to do some work. He was riding his pushbike home and I was waiting at the front door for him – he never made it.

On the corner of our street, Trist was hit by a 4WD, travelling at an estimated 60 kms per hour.

Marc Shearman was the first responder who kept Trist alive until back-up from Tin Can Bay arrived. Marc also assisted while the ambulance crew stabilised him at the scene so he could be moved around the corner to the waiting chopper and critical care doctor. It took what felt like ages for them to then stabilise him for the trip to hospital.

I will never forget that helicopter ride, begging God not to take my son whilst he was being defibrillated in front of me.

We had some good fortune on our side, Trist was lucky Marc arrived on the scene within minutes of the 000 call, the ride to Lady Cilento was fast and he was lucky Lifeflight responded extremely quickly.

We arrived at Lady Cilento within two hours of the initial 000 call, it was a miracle he survived the first 24 hours.

Trist suffered a broken leg, hip, collarbone and six fractures to the skull – yes, he was wearing a helmet!

Two weeks in, we were advised to turn off his life support. Every day for two weeks, medical professionals would give us another reason why we should let him go and each time we refused.

They had given us many reasons saying he would have no cognition, he would need 24/7 hospice care, he would not be able to maintain his airway, cough or swallow, the basics needed to sustain life. I just knew in my heart that it wasn’t his fate.

After four weeks, and after two failed attempts to see if Trist could breathe without the life support, he finally sustained his own airway, he was breathing. This was by far the happiest day of my life, no longer did I have to make the decision if my child should live or die.

We were moved to the rehabilitation unit and Tristan’s gains were small. It was like his whole body was sleeping and slowly each muscle would wake up.

First he was able to position his head to keep his airway open, then one eye would open slightly then the next. He slowly gained enough strength to open both eyes slightly at the same time. His team of therapists tried everything to make him respond quicker but his body needed more time.

Towards the end of our hospital stay we were told that they did not expect him ever to have the cognition to understand how to hold a cup up to his mouth. The signs of improvement were not looking good.

Five months after the accident we prepared to bring Tristan home. His room was set up like a hospital room and he was fed through a tube in his nose. We had no communication from him but we could see him trying to respond to basic commands.

I NEVER GAVE UP HOPE! Even in darkest moments.

January 2018, six months after the accident, it was like a switch was turned on. Trist started responding. Slowly he started to do things he had never done before, raising his arm to scratch, closing his eyes on command, poking out his tongue. He even raised a lollipop to his mouth! After being told there would be little chance of him being able to put a cup to his mouth this was a miracle.

February, we were heading back to Lady Cilento for reassessment and a PEG (feeding button in his belly). A week before his return, we had him eating enough pureed food to sustain his diet. It took a long time for each meal, water and meds but we were determined to avoid a surgery. By April, he was eating steak and pork crackle!

February 14, my 40th birthday, Trist repeated, “I love you.” This was the first time he had spoken since the accident seven months earlier. He was then able to start repeating two or three words after they were spoken to him.

A month later he was able to initiate conversations leaving his speech therapist, well ,speechless. His therapists say he is recovering quicker than any other severe brain injury survivor they have ever seen and are often left scrambling in their sessions as he has surpassed them in his progress. 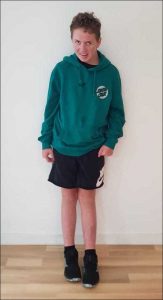 Now we are in June, Trist is walking assisted, he is back at school one afternoon a week, is reading, can do basic maths and is starting to remember his past. He also tells some cracker jokes and calls us by our pre accident nicknames.

He remembers playing footy at St Pats (he went there for six months in year seven) and riding his ‘pushy’ around Rainbow. He teases his sisters and brother and loves to make people laugh, all wonderful qualities of the boy he once was.

There is a long journey ahead of us and years of therapy, but he is here. We are so grateful for any progress he makes but to see his personality shining through is a real miracle and a blessing.

As parents, we will always make sure Tristan has absolutely every opportunity to get back everything he lost in this horrible accident, while ensuring our other three children have a happy childhood.

Marc has kindly offered to shave his signature beard to raise funds towards purchasing a hydro pool for Trist. With the help from the Rainbow Beach Sports Centre and generous donations from businesses in Rainbow Beach and Gympie, a multi-draw raffle has been organised.

Tickets are just $2 each and can be purchased at the Rainbow Beach State School, Rainbow Beach Meats, Sea Salt Grocery Store, 7th Wave and Coffee Rocks.

Prizes include vouchers from various local business; a weekend away in Buddina Beach, tool box full of tools and much more.

The winners will be drawn at the Rainbow Beach Sports Club on Friday July 13 and Sunday July 15.  You do not have to be there to claim your prize, however there will be a barefoot bowls and BBQ day from 1pm at the Sports Club on July 15 to celebrate the one year anniversary of Tristan’s miraculous survival.

Having your support really does help so much so. Thank you Marc for being that first responder, thank you for offering such a generous fundraising opportunity and thank you to all who donate and contribute.