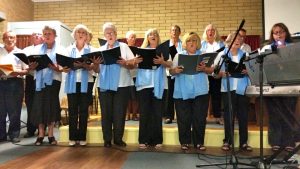 Another bumper evening was enjoyed with new sounds from Simon who woke us up from a few beautiful but quiet pieces of music. He really was a bundle of energy.

The choir sang two songs, of which the second was very ambitious but all harmonies were there. We would always welcome some male voices to complement the musical harmony.

It was lovely to hear Sue and Lu who bring their own brand of expertise, as well as fun, to the programme. Sue and Pam played two classical pieces at the end, which were greatly appreciated.

Jo played two pieces by Debussy so beautifully on her flute. We are so lucky to have such talent in our midst.

Sarah joined Kay and Len in two folk songs as well as her own funny Irish song and Kirsten and Neil played “Hard Times”, a highlight of the evening.

Ron opened our programme with gusto as usual and he was closely followed by Terry who sang an old favourite with such confidence.

Graham, a loyal attendee at Music Nights read two famous poems by William Blake which we all enjoyed.

Our ‘continuity person’, Colleen, bravely collects suitable material to fill the gaps and has always a funny story to tell.

Last Music Plus Night we contributed all your $2 entry fees and more, which came to $160.90, to Little Haven Palliative Care on behalf of a dear relative of Sue Flower (a much admired musician), who lost his battle with cancer.

Next Music Plus Night will be on September 28 – same time – same place.