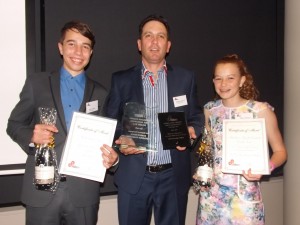 Travelling overseas at the time, it was the prize that editor, Michelle Gilmore was hankering after!

In her stead, their two eldest children Jack and Kate accepted the awards with their dad.

Business Director, Heatley with his background in marketing  was chuffed, “We also achieved second and third positions for some of our advertising campaigns which was thrilling considering we were up against some of Queensland’s largest regional publications.”

“Our little monthly papers were head to head with bi-weekly and weekly  newspapers run by major national newspaper companies. It is hard to describe the scale of the win, considering the competition and all their resources.”

Judges commented on the visual appeal and creativity of the advertising and said the Tin Can Bay Family Butchery was a “wonderful campaign….hard to separate from the winner.”

The Cooloola Coast’s sister paper, the Hinterland Times also won the Technical Excellence award for circulation 5000 and up to 20 000.

The wins were a reflection on their professional team, graphic designers and writers plus the support received from the community.

“Michelle and I devote a huge amount of time, effort and care in supplying a good read for our community and excellent value for our advertisers.”

Since arriving in town nine years ago, they always admired the local paper; all six of the Gilmores taking turns to spot themselves or their friends and read up on the local stories. With Heatley’s years working in advertising and business, and Michelle’s work with tourism, community development and health promotion they were delighted to build on the foundations Tony and Mary Huxley had nurtured for all those years.

“The handover and guidance we received from Tony, and from ex ABC journalist Michael Berry and partner Faith Baigent, when we purchased the successful Sunshine Coast’s Hinterland Times, allowed us to continually review the pages, and help community groups and businesses get their messages across.”

Next year they plan to enter more categories, now they know what the awards are all about!

Heatley emphasises,  “We send a big thank you to our readers, contributors and advertisers as well as our brilliant team for making this possible.”