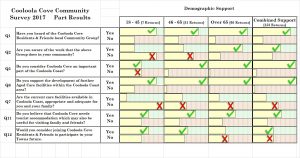 The 2017 Cooloola Cove Residents & Friends survey revealed the majority of the 153 survey respondents had heard of CCR&F, but only the Over 65s were aware of the work done.

There was overwhelming support for the development of further aged care facilities within the Coooloola Coast area, with many feeling current care facilities were not appropriate and adequate for individuals and their families.

More results next month! Again thanks to the Cooloola Cove residents for their support to the survey.

AGM for will be held on October 16 at the Cooloola Veterans and Community Hall, immediately after our normal meeting, which starts at 10am. Our group has busy  times ahead, and some of that will be announced by the new committee, post AGM.

Please come along to our meetings to support the future of Cooloola Cove. Find out more: Graham Langdown, President: 0433062906