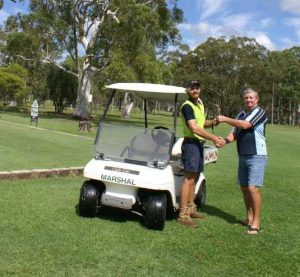 Dustin Carne, the new greenkeeper at Tin Can Bay Country Club, is welcomed by Mick Hall, who retired from the role after 25 years service

Mick Hall was responsible for maintaining the 18 hole golf course and two bowling greens, full time for 38 hours each week and some weekends, for a quarter of a century at the Tin Can Bay Country Club.

Mick said, “I enjoy living in this region and I loved my work and being responsible for the golf and bowls greens and seeing it transform into the beautiful greens it is today.”

Twenty five years is a long time to devote yourself to the one place, but Mick said, “I lived my whole life in the bush and moved to this area for a coastal change.”

Born in Warialda, NSW, he said, “I started work at the Warialda Golf and Bowls Club in 1993 where I did my apprenticeship.”

Mick moved to Cooloola Cove and his plan is to remain here in his retirement, fishing and relaxing – being near the ocean was the drawcard for him, “I love holidaying in the bush and then returning to be near the water.” 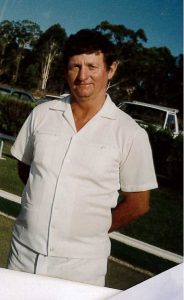 Mick Hall in his bowling whites – some time ago!

When asked about his memorable moments, Mick had a few: “Watching managers come and go – eight managers in seven years! Seeing the club house development from a tiny shed into the bar, restaurant and function room club house it is today. And finally, the creation of the second bowling green.”

He said there was always plenty to laugh at, “too many to say”. But it was good to hear he was able to enjoy the fruits of his labours, “I played golf every week, been playing golf since 1966.

I played bowls all the time and I was very good at it.”

As for challenges over the years, he said they rebuilt most of the golf greens: “When I first started the greens were full of weeds and the bark two-foot high at the base of the trees, all raked up and carted away.

“This was a big job but very rewarding. Also there was no water them days, but now treated water is pumped into the dams.”

Challenges that his successor, Dustin Carne, does not have to worry about.

“I’ve been finishing off old projects, maintaining golf and bowling greens, keeping true and firm playing surfaces for our members.”

Dustin, the new greenkeeper, was born in Injune, and moved into this region in 2004: “I started at the country club in September 2015 as an assistant labourer, signed my apprenticeship papers in December 2015 and completed my studies in November 2018.”

He has a new apprentice and three other staff working under his instruction.

Now based in Tin Can Bay, the first few months in charge have been a little stressful, “As I have big boots to fill. The country club has a Pro-Am organised for June this year, I have to ensure that the entire golf course is looking in top condition.”

This includes removal of bricks around each tee, to tidy up the course and simplify maintenance, improving the entrance gardens, turfing around the entrance to the golf starters box and implementing new work practices.

He would like to thank Mick for all he has done for him over the years.

Mick left with some parting advice for Dustin: “Don’t take any nonsense from the members and do things your way.”

And a tip for members: “Appreciate the beauty of your facilities and what this region has to offer.”