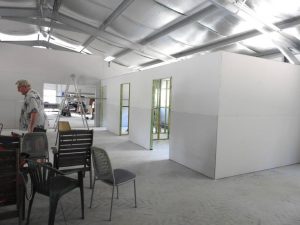 It has been a long journey for the past two Committees, especially concerning the allocated land by Council. It was discovered this land was a natural habitat for rare frogs and vegetation, so many extensions were given.

Government finally gave an ultimatum, if the shed was not built by the end of September 2017, the grant would be called in.

To complicate matters, the shed was classed as a 10a storage shed and could not to be used until a ‘material change of use’ was advertised to change the shed to a Community Care Centre (Men’s Shed). This has now been completed.

Plumbing approval has been given by Council. Brad Johns Plumbing completed the internal fit-out for the kitchen, toilets and first aid room on May 15 which as been passed by Council.

Fit-out of internal work, such as kitchen cabinetry, tiling of the toilets, sheeting of the walls and electrical work can now be completed.

If you are able to help, working bees are held every Thursday from 9am. Meetings are held the first Saturday of each month from 10am behind City Farm. For further information, contact Brian on 5486 2835.

The AGM will be held Saturday, June 30 at 10am. All paid up members of the Association should attend.