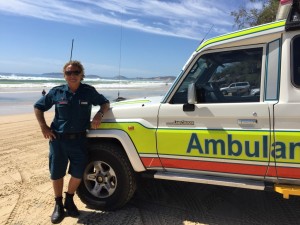 Our new ambulance officer, Craig Ainsworth, laughed when told there was a wave at Rainbow Beach – he didn’t believe it.

Craig said, “I’ve always surfed, all my life.” Working at Hervey Bay at the time, a male nurse he knew told him about Double Island Point.

“We drove down through Freshwater and came out through the cutting at Teewah. I thought ‘Wow’. I have surfed all up the Eastern coast, and in Europe – but here is the most beautiful beach in the world.”

Craig and his wife Megan bought a house here, then he was lucky to get a transfer to Tin Can Bay.

Since the Christmas holidays, an officer has been permanently based at Rainbow Beach — very welcome news for residents and tourists alike.

Locals have been very positive about the new service and that it is here to stay. The other full time officer started last month. The paramedics are on call for eight days straight.

He said when he was offered the position at Rainbow Beach, “It took me one second to decide.”

Originally a North Queensland miner, he has worked as a paramedic for 11 years.

It has been ten years since he and his wife moved to Cooloola Cove, and they have just returned from over three years out west.

“We love the community. The beach, the area and people. We love the fresh water, Seary’s Creek, nature and the secret spots we’ve found.”

“Professionally, I enjoy being part of a close knit community. Here you get to know people. It’s kind of a sense of belonging.”

The Local Ambulance Committee warn that people requiring an ambulance should in all instances ring 000 and should not attend the Rainbow Beach base or the Ambulance Station in Tin Can Bay.

The officers cover the whole of the Cooloola Coast area and as resources are limited, they may be out on a call and away from base. By not ringing 000 immediately, unnecessary delays could occur in attending to the person requiring medical attention.

But find you they will. Craig’s local knowledge of beach tracks and experience of driving on the beach was one of the reasons he scored the job. He says, “There’s nowhere I can’t find anybody.”