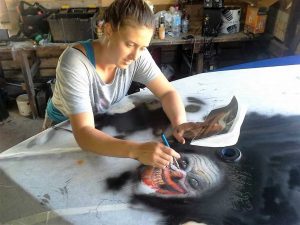 This festival offers a $2500 Open Award first prize with more than $8000 in overall prize value, and attracts quality entries from throughout the south-east corner.

The festival kicks off with a gala opening night on June 29 at the Imbil Public Hall, and is followed by open viewing from June 30-July 2, finishing with the popular People’s Choice Awards and closing ceremony on July 2.

Major sponsor Bendigo Bank has demonstrated their support of the festival by increasing their Open Award contribution, and Twin Bunya Park and Bush Haven both return as festival partners. New sponsor Thunderbird Demolitions has given $500 for the people’s choice award.

The lucrative festival already draws entries from throughout South-East Queensland and spokeswoman Heinke Butt said it was really lifting the bar this year.

President of Mary Valley Artslink, the community organisation which hosts the art festival, she said the $2500 Open Award took the competition to a whole new level.

There is a $600 first prize for the Ron Jeffery Landscape category, with $400 prizes in other categories: 3D, Novice, Animalia, Still Life, Human Form/Portraitures, Drawing, Natural Flora and Abstract.

Entry forms for the art festival are now available through the usual outlets and online at www.maryvalleyartslink.com.au  Entries close on June 15.