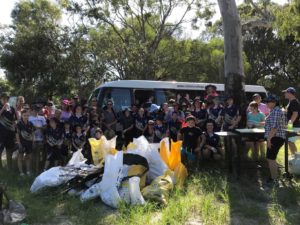 Clean Up Australia Day 2018 kicked off with the Schools Clean Up Day which took place before the main Community Clean Up Day.

During the Rainbow Beach State School morning parade, Elli Webb from Gympie Regional Council, and Grant Phelan from Queensland Parks and Wildlife Service, discussed the benefits of reducing, reusing, recycling, and the hazards of plastic in our environment.

After parade, Elli and Grant guided students on a rubbish patrol in and around the school grounds and local sports oval. Plenty of bags were filled, mostly with plastic.

On the Community Clean Up Day, Cooloola 4WD Club cleaned up along the Freshwater Road, whilst Peter White’s group, Fraser Coast 4WD Club and a large group from Victory College cleaned up at Inskip Peninsula.

All in all, several trailer-loads of rubbish went to the waste transfer station, a big win for our waterways, beaches and oceans.

Many other unsung volunteers also did their bit on the day. Thanks to Gympie Regional Council and Queensland Parks and Wildlife Service for organising supplies for the Clean Up and barbeque afterwards.

In Tin Can Bay, TCB Fishing Club members were assisted by many community members and other volunteer groups. The cleaning of parks and foreshore was very successful and they are pleased to report the amount of rubbish collected was far less this year.

It seems the message is getting through, as the public are taking more care and not leaving their rubbish in our parks or on the foreshore for others to collect.

The club would like to thank the TCB Lions Club and all the volunteer groups, including QF17 Coastguard Tin Can Bay, for collecting rubbish from our creeks and foreshore areas.

Clean up Australia Day is a reminder that everyone can contribute every day of the year to reduce waste.