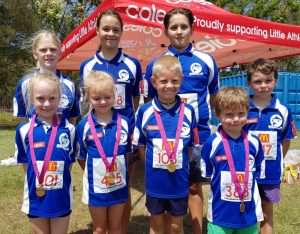 Ten of our athletes travelled down to the Nambour Little Athletics (LA) oval at the Sunshine Coast PCYC to compete in the Sun Coast Regional Relays.

This was the 1st first for the Cooloola Coast LA Centre as we’d never entered this Little Athletics competition before.

The 2nd first was the formation of a Cooloola Coast relay team made up of two U7’s and two U8’s from the Cooloola Coast centre making it a whole centre team instead of combining with other small centres.

The 3rd first wasn’t initially realized as an error occurred in the Regional Relays recorders room and after appeal it was recalculated that the Boys U13 Shot Put small centres team created by adding the two highest small centre results came in first place. Well done Logan Smith and his throw of 8.81m who will now compete with Louie Smeulders from Bli Bli LA at the State Relays.

The 4th first is CCLA have not one but two athletes representing at the State Relays as Logan will be joined by Anjelica Geurts whose small centre combined relay team qualified in the U13 Girls 4 x 100m and Medley. Well done guys!

Christmas is fast approaching and the Centre will be breaking over the festive season. With that joyous spirit in mind I’d like to take a moment to give thanks to all those that glue the Cooloola Coast Little Athletics Centre together.

Thanks to Coach Bill for the enthusiasm and the years of skill you pass onto the kids, all the parents who have stepped up to either coach, time keep, record, set up/pack down or just lend a hand, the TCB School for allowing us to use their grounds, Sleepy Lagoon Hotel Social Club for thinking of us with a donation and a big thanks goes to Tin Can Bay Storage Sheds who have continued to sponsor the Centre that assists with funding the nominations to LA competitions, keeping registration fees affordable and allowing the Centre to focus on training instead of fundraising.