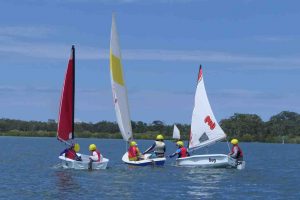 The junior sailing course had 12 children enrolled. The first day was spent teaching sailing to the beginners and refreshing the experienced.

On that day, nine novice sailors set out to learn how to be pirates, with another three already pirates helping the others learn the trade.

With only the basics of different parts of the boat, how to steer and what to do when you capsize, taught for the first half hour on land, the beginners set out for their first big adventure.

The sun was shining, the wind light and the water so still you could see every little detail on your face. By the afternoon the wind picked up a little and soon Laser Bugs were zooming all over the place.

On the second day of pirating, A2 came close to the first victim A1, leaping across the water between the two boats and capsizing A1’s boat.

A2 continued his rampage throughout the day, making many enemies along the way. But there was another bigger and better pirate than A2, P.

P, once a victim to A2’s onslaught, now the mightiest pirate. As A2 capsized P’s Bug, P swam and hopped on A2’s Bug, sailing away with A2’s former crewmate, leaving A2 stranded.

The third day was the day of the pirate race. All boats left port to attend this great event. Many troubles were had on the water including main sheets coming loose, an outhaul breaking and eventually resulting in the boom coming off the mast.

Throughout all this hardship there came champions. A2 and D aged 13 and 6 and in the slowest boat.

After the race all the boats were packed away as a big storm was brewing. This was followed by story time with Graham, learning lots of new knots, and the sausage sizzle.

The three days were a ball for all the kids who came. Nine landlubbers went in and nine pirates came out; new friends were made.

At the end of the day, all went home with grins on faces and water pistols in each hand.

(An edited version of the original written by A1 and A2. Names have not been included to preserve the identity of the pirates. However they are pictured,).